Humans have been fermenting wild honey, grapes, and grains to partake in the ritual of social drinking throughout all recorded history, spanning cultures from the wine-drinking Greek intellectual circles of 350 BC, to contemporary times.

But today, when it comes to catching a buzz, there’s no such thing as one-size-fits-all. Some people simply want a refreshing way to elevate and amplify their social experiences without that next-day wine hangover or the most potent pot on the shelf.

This was what the creators of Cann Social Tonics had in mind when they conceived their line of low-dose cannabis-infused beverages in 2018. “For thousands of years of human history, we communed around beverages. So much of our social structure is built around alcohol—and that's not necessarily a good thing,” Cann co-founder Luke Anderson told Ember.

Now one of the best-selling cannabis drink companies in the U.S., Cann is taking the notion of “California sober” to the next level, offering the very first microdosed cannabis beverage as an uplifting social lubricant—completely hangover-free—while simultaneously putting equity, diversity, and inclusion initiatives at the forefront.

The LGBTQIA+ community has been historically leading advocacy and activist efforts for the legalization of cannabis since the 1980s. Now queer-owned cannabis brands like Cann are becoming a model for how companies in this space can take initiative towards a better future in cannabis for all.

We talked to Cann founders Jake Bullock and Luke Anderson on how Cann quickly found its natural ingredient-focused cannabis tonics at the forefront of a social drinking movement sans alcohol, and what responsibilities they believe all cannabis brands must take on to proactively right the wrongs of the War on Drugs. 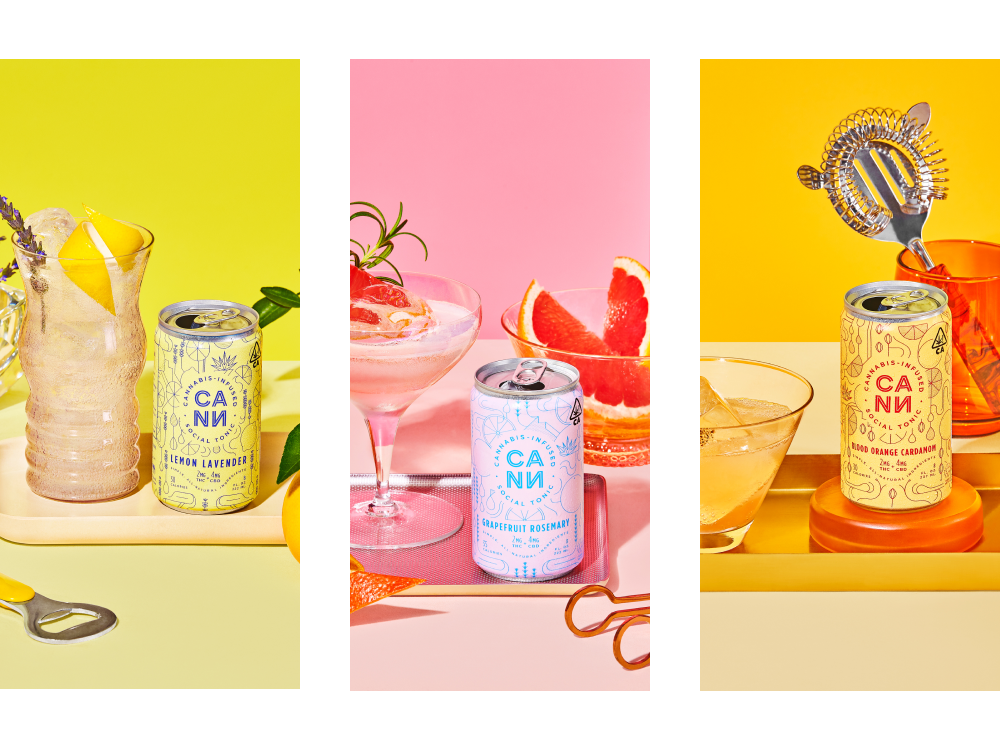 A vision for social drinking post-alcohol

Luke Anderson and fellow co-founder Jake Bullock may not have known they were destined to create one of California’s most popular new cannabis companies when they met in 2013, but their futures soon became apparent. After becoming fast friends on the fateful day they both started working at Bain & Company in San Francisco, the pair’s shared experiences soon led them to realize there were big things ahead.

The duo, who both identify as queer, understood the complicated relationship many both in and out of the LGBTIA+ community have with alcohol. Anderson and Bullock have been forthcoming about their own struggles with drinking, admitting they used alcohol as a way to cope.

“It comes from our experiences in the early days when we were struggling with identity, then you fully come out and find that the community that you've come out to is also alcohol-charged… it's a really different world,” Bullock explained.

Bullock, hailing from Colorado, had witnessed one of the nation’s first legal cannabis markets emerge and was a true believer in it. The status quo of high-testing THC products felt alienating to many demographics looking for a lighter, more energizing social buzz, and Bullock envisioned a future where microdosing cannabinoids became the norm.

In a classic yin-and-yang founder scenario, Anderson on the other hand, was a Massachusetts native whose sole cannabis knowledge came from a nightmare pot brownie scenario in college. While he was receptive to the idea, it wasn’t until several years later when the party lifestyle began to catch up to them both that the spark for Cann was born. 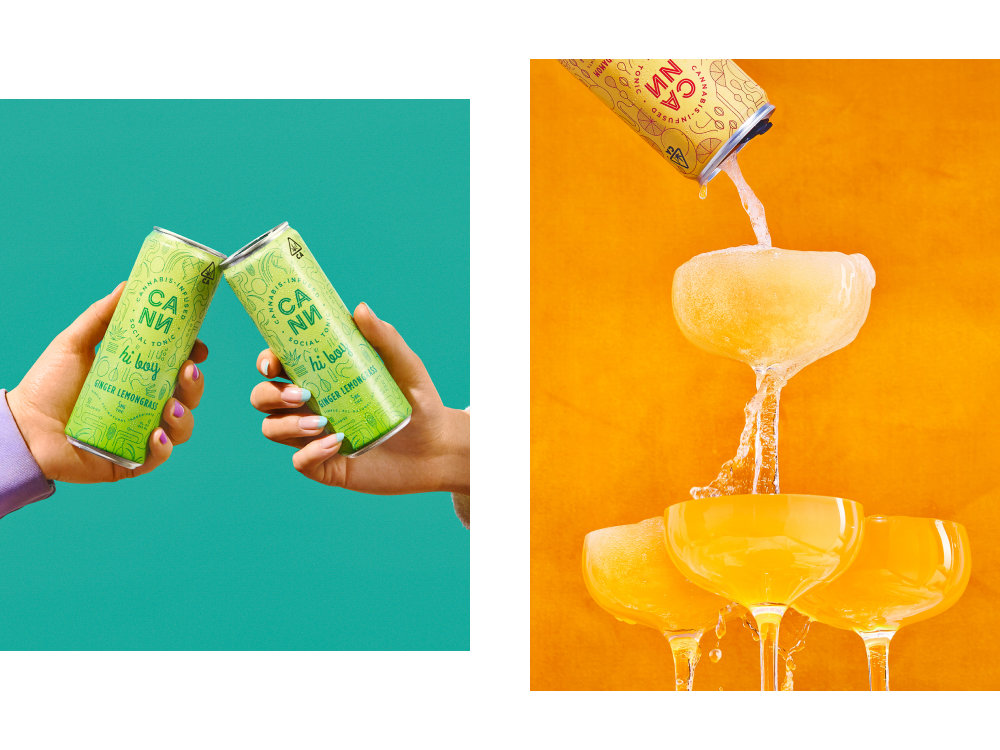 Leaning heavily on their CPG and management consulting backgrounds, the pair set out to develop a line of drinks that were not only delicious, but hip and accessible to the average non-cannabis user. The idea was to create a product that anyone from a Gen Z WeHo influencer to their grandma in the Valley could enjoy.

Anderson carefully hand-selected premium ingredients, focusing on elevated pairings that were a perfect marriage of savory and sweet. After months of R&D, the pair had concocted 24 unique formulations, opting to offer three flagship flavors: lemon lavender, blood orange cardamom, and grapefruit rosemary each containing 2mg of THC and 4mg of CBD—with plenty more to come, like tantalizing varieties of lime basil and cranberry sage.

Shortly after the line launched in June of 2019, Bullock and Anderson concocted a plan to curate a pop-up outside of one of the first retailers to carry Cann—the MedMen storefront in Venice. “We thought a lot about where our target consumer is today, and there was one dispensary at that time that was starting to market to the canna-curious, and it was MedMen,” Anderson said.

The concept was simple: a complimentary pink graphic Cann sweatshirt for anyone who produced a receipt from the store showing proof of purchase of a Cann six pack. The whimsical giveaway, paired with budtender education on the benefits of low-dose products, was a runaway success; off-the-charts customer satisfaction led to a word-of-mouth firestorm that transformed Cann from start-up to a top-selling cannabis beverage within months.

“It's a really cool [example] of how brands can work really closely with retailers,” Bullock said of Cann's first partnership with MedMen. “It was a really good problem to have that we couldn't make enough to keep up with demand!” The company quickly caught up with their production growing pains, quickly expanding into three more states: Nevada, Rhode Island, and Illinois.

Regarding the smash-hit launch, Cann recently shared on the brand's Instagram: "The beverage industry has long relied on objectifying women to connect with consumers... [reinforcing] a culture of toxic masculinity." The post called out companies who consider Pride month a marketing push, "rainbowwashing" their feeds without authentically supporting the queer community.

"Being a queer-owned beverage brand, we had to tackle both of these issues simultaneously and find a way to poke fun at patriarchal culture while elevating queer artists who deserve the spotlight." Cann is also collaborating with queer-owned brands Sonder and Drew Martin for a Pride Pack that gives back all month with a donation to queer, BIPOC organizations like Amber Senter's Supernova Women and Copper House in Detroit.

Diversity & equity are more than core values at CANN

From the moment Cann was founded, Bullock and Anderson made promoting diversity, inclusion, and equity a central focus. From ensuring there’s representation throughout the company to donating tens of thousands of dollars to BIPOC entrepreneurs and amplifying their collective voices.

“We are very hyper-aware of the communities that are most harmed by the War on Drugs and because our industry is [now] legal, we have to keep them as an active voice,” Anderson said. He pointed to partnerships with organizations like Cannaclusive, a collective dedicated to facilitating fair representation of minorities in cannabis, which has helped educate the company on how to both walk the walk and talk the talk.

Anderson emphasized the intrinsic commitments and change-making obligations cannabis industry entities have today: “Being a cannabis brand at all, you have to donate your money to BIPOC cannabis organizations. You have to use your social platforms to share content from BIPOC voices. You have to hire and promote BIPOC people [at] every level of the organization."

But change doesn't just happen there. "There's a lot of cannabis brands out there that are touting diversity statistics, but it's like, okay, you have a lot of diversity at the entry-level, but you have no diversity in your executive team [and] at the board level," noted Anderson. "That's where the actual change in this industry happens.”

The brand is also heavily involved with Eaze Momentum, a social equity incubator, as well as Cannabis for Black Lives, a coalition Bullock co-founded aimed at supporting BIPOC communities most greatly affected by cannabis criminalization.

Tyson Rossi, MedMen's Head of Product Vision, credits Bullock as a go-to partner in the premier retailer's own D&I initiatives: "Working with Luke has helped elevate different aspects of our commitment internally. We partner with Cann regularly to help support and amplify LGBTQ+ and BIPOC causes to drive positive change for the underrepresented communities in this space."

For Bullock and Anderson, the desire for equality and respect for all people, regardless of who they are, is what truly drives their business and inspires them to continue setting the bar high for a buzzing industry still in its infancy.

“It’s really important to us to build a diverse and inclusive organization where people feel like they belong,” Anderson noted. “We're not here to be ‘tolerated’—we want to be integrated into this society fully.”

Rachelle Gordon is a cannabis and psychedelics writer with a particular interest in the use of plant medicine for neurological conditions. She has been featured in publications such as High Times, CannabisNow, DoubleBlind, Cannabis & Tech Today, and MG Retailer. Her favorite cultivars include Tangie and GMO.

These statements have not been evaluated by the Food and Drug Administration. Products are not intended to diagnose, treat, cure, or prevent any disease.
Back to List
‌
6 Asian American Cannabis Entrepreneurs in Conversation