Today’s push toward full cannabis legalization began with the movement for medical marijuana. But where in history did the idea of medical cannabis first originate? While archaeologists have found evidence that Sumerians and Egyptians enjoyed the plant’s mind-altering effects, some of the world’s earliest written references to cannabis as a medical remedy come from ancient India.

Across thousands of years, Indian Ayurvedic physicians have prescribed cannabis for many of the same reasons people value it today. Ancient texts mention the plant’s effectiveness at relieving anxiety, increasing appetite, clearing away phlegm, and “inspiring mental power.” Some ancient Indian sages even claimed cannabis could cure diseases like leprosy—or could prevent a person from aging altogether.

Let’s take a journey back to ancient India, and see how Ayurvedic healers discovered a wide range of uses for cannabis—many centuries before we recognized these benefits in the West.

From religious offering to medical prescription

The true origins of Ayurvedic medicine are lost in the mists of prehistory. Tradition holds that its techniques were passed from gods to humans some 8,000 years ago—and while that may be a questionable claim, archaeological evidence shows that at least some Ayurvedic herbs were in use as early as 3,000 BCE, in the bronze-age Indus Valley civilization.

However, the use of certain herbs doesn’t imply the existence of a fully developed Ayurvedic medical system. In fact, India’s earliest written mentions of many herbs place them not in a medical setting at all—but a religious one.

Take, for example, the collection of hymns known as the Atharvaveda. Composed around 1,500 BCE from earlier oral traditions, the Atharvaveda mentions bhang or bhanga (cannabis) as one ingredient in an herbal preparation that “releases us from anxiety.” Judging by the hymnal context, this preparation was most likely a ritual offering to certain Hindu gods—an offering whose mind-altering benefits would nonetheless have been enjoyed by all who inhaled it.

Still, while references to cannabis abound throughout Indian history, many “prescriptions” were more mystical than medical. For example, an anonymous work called the Anandakanda, probably composed around the year 1000, describes the cultivation and preparation of cannabis in detail—then explains that a person who lives in celibate isolation while ingesting it “lives for 300 years free from any disease and signs of old age.”

But over the intervening centuries, Indian medical thinking was evolving and solidifying into the system now known as Ayurveda—which included, among many other ideas, an elaborate array of uses for medical cannabis. 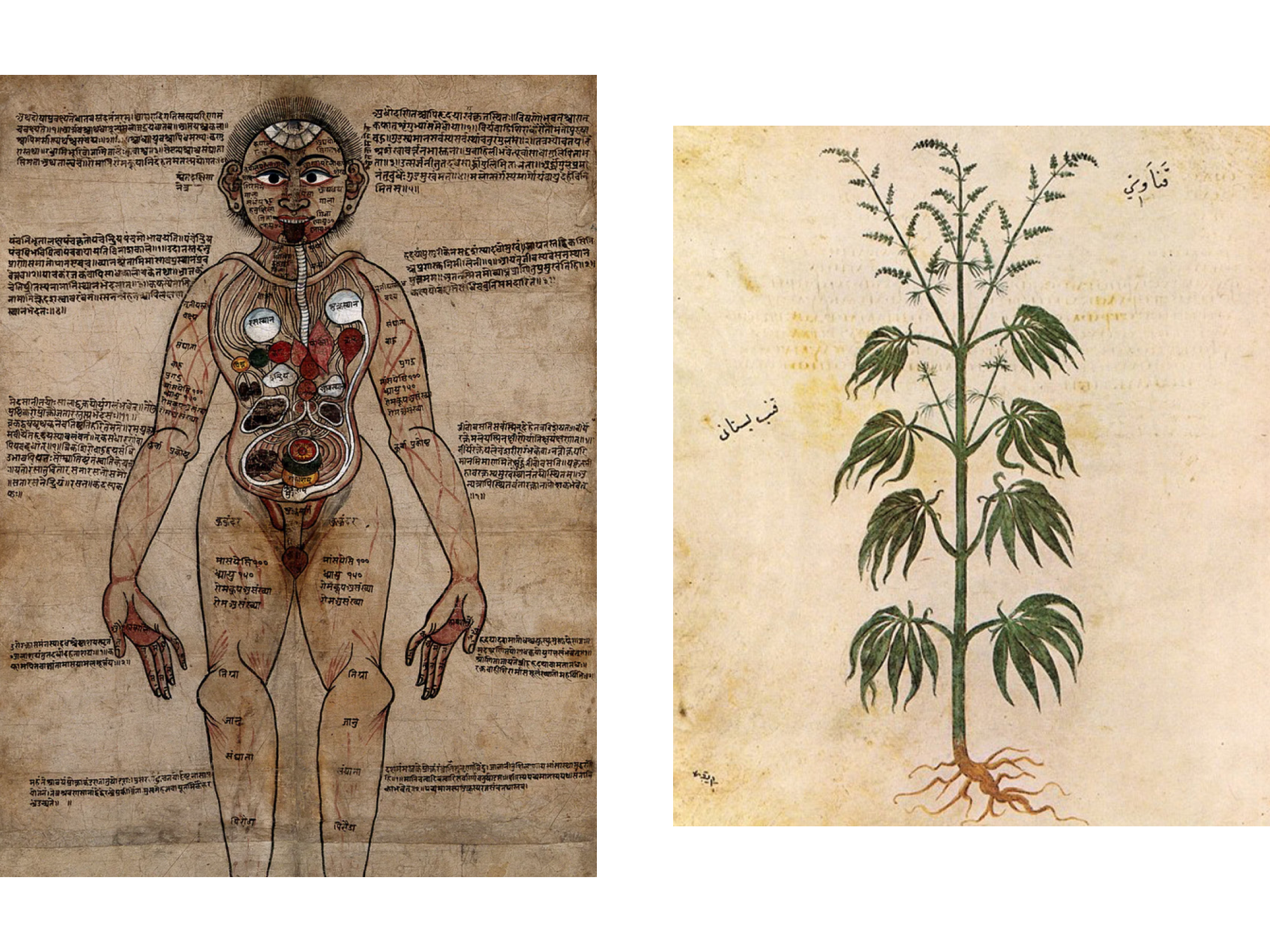 “A drug that destroys every anxiety”

Around 600 BCE, a full thousand years after the Atharvaveda’s hymns, a text known as Sushruta Samhita (“Sushruta's Compendium”) recommended cannabis as a therapy for “phlegm, catarrh [sinus and throat inflammation], and diarrhea.” This is one of history’s oldest recorded references to cannabis as a therapy prescribed for specific medical symptoms, rather than just for recreation or mystic ritual.

The author(s) of the Sushruta Samhita, along with other texts like the Charaka Samhita, sought to unify their understanding of anatomy, physiology, disease, surgical techniques, and medicinal plants into a single cohesive system of theory and medical practice. By the 300s BCE, this theory had been formalized into the system of Ayurveda—“knowledge of life and longevity.”

At its core, Ayurvedic medicine is based on the belief that the human body consists of three functional elements, or doshas: vayu (wind), pitta (bile) and kapha (phlegm). Practitioners believe that all mental, physical, and spiritual ailments derive from imbalances among these three doshas—and that a combination of herbal medicine, exercise, yoga, meditation, and other techniques can bring them back into balance and prolong a healthy life.

Ayurveda’s holistic system found many medical uses for cannabis. For example, the 13th-century text known as the Rajanighantu described it as a versatile herb that “destroys phlegm, expels flatulence… sharpens the memory and excites appetite.” Two hundred years later, a text called the Rajavallabha heaped glowing praise on the herb, describing cannabis not only as a cure for leprosy, but also as a “desire-fulfilling drug” that “begets joy and destroys every anxiety.”

To this day, Ayurvedic therapists still prescribe cannabis for these same reasons. But modern practitioners are coming down hard on the line between medicinal and recreational use—even as Ayurvedic medicine itself draws sharp criticism from Western clinicians.

“So holy and gracious an herb"

Ayurvedic medicine remains widely practiced—not only in India, where as much as 80 percent of the population report using it, but also in the U.S., where an estimated 240,000 people follow its teachings. However, while clinical trials have confirmed the usefulness of certain Ayurvedic herbs (including cannabis), the U.S. Food and Drug Administration (FDA) has banned many Ayurvedic medicines from entering the country, after finding that one-fifth of them contain toxic metals like lead, mercury, and arsenic.

At the same time, Ayurvedic practitioners themselves take a hard-line stance on the distinction between medical and recreational cannabis use. Although some Ayurvedic experts support the legalization of cannabis for medicinal purposes, they emphasize that it should only be used in very small amounts, as part of a planned treatment program—never as a recreational intoxicant, which is strictly forbidden in mainstream Hinduism.

But despite the fact that cannabis remains illegal in modern India, millions of Indian people continue to smoke it for both religious and recreational purposes, while bhang shops serve up cannabis beverages prepared from sacred recipes in ancient Ayurvedic texts. The lines between medicine, spirituality and intoxication can be difficult to draw, even today.

Perhaps we can leave the last word to a Hindu fakir (holy man) who, when interviewed about his love of the leaf more than a hundred years ago, had this to say:

It would rob the people of a solace in discomfort, of a cure in sickness, of a guardian who… brings union with the Divine Spirit. So grand a result; so tiny a sin.”

Ben Thomas is a journalist and novelist who's lived in 40+ countries. He specializes in telling stories from the frontiers of science, history, culture, and the cosmos—and the points where all these fields intersect. Find him on Twitter at @writingben.

These statements have not been evaluated by the Food and Drug Administration. Products are not intended to diagnose, treat, cure, or prevent any disease.
Back to List
‌
Micro Doses, Macro Effects: A Quick History of Microdosing

‌
How to Cultivate Peak Experiences and Reawaken Your Sense of Wonder

‌
Getting to Know Humboldt Apothecary

‌
Is Binge-Watching TV Actually Bad for Us? Science Has Some Answers