This Cannabis Medicine Has Been Federally Legal Since 1985. What's Special About It?

As a growing number of states legalize cannabis for medical and recreational use, many patients, consumers, and legislators are all asking the same question: When are the FDA and DEA going to catch up with the rest of American culture, and just legalize THC already?

However, what many legalization advocates don’t know is that an FDA-approved, DEA-sanctioned THC medication has already been legally available since 1985. For the past 37 years, physicians in all 50 U.S. states have been free to write prescriptions for Dronabinol, a fully psychoactive delta-9-THC medicine, for a variety of health conditions—including appetite problems, glaucoma, sleep apnea, and nausea related to chemotherapy and HIV.

To answer these questions, we’re going to need a clearer picture of the federal approval process for medications that contain psychoactive ingredients like delta-9-THC. So let’s take a closer look at how Dronabinol was developed, what regulations it has had to abide by in order to gain federal clearance, and what today’s commercial cannabis vendors would have to do to get FDA approval for their medicinal THC products.

What exactly is the difference between Dronabinol (Marinol) and medical marijuana?

Cannabis has been a Schedule-I illegal narcotic at the federal level since Richard Nixon’s signing of the 1970 Controlled Substances Act. In the late 1990s, some U.S. states (starting with California in 1996) began to legalize cannabis for medical uses, under the name “medical marijuana.” However, the FDA and DEA don’t recognize “medical marijuana” as a legally valid classification, which means possession of cannabis products can still result in arrest, conviction, and incarceration in many states.

Dronabinol, on the other hand, is a synthetic form of delta-9-THC “suspended in sesame oil and encapsulated in soft gelatin capsules.” This is fully psychoactive delta-9-THC, which can produce a definite high—in fact, some studies have found that Dronabinol can cause even more intense psychological effects than natural cannabis, probably owing to its higher concentration of pure THC. A 2013 study found that it can relieve pain more effectively, too.

How did a THC-based medication manage to gain FDA and DEA approval at the height of the “Just Say No” Reagan administration?

However, in contrast to naturally occurring cannabis, synthetic Dronabinol is packaged in precisely measured doses, without any other cannabinoids, impurities, or additives. And unlike natural cannabis—which can be smoked, vaped, eaten in edibles (or taken via a variety of other routes)—Dronabinol can only be taken in pill form. The body also absorbs Dronabinol more slowly than cannabis, and it remains in the bloodstream longer as well.

Doctors in all 50 states can legally prescribe Dronabinol for many of the same complaints that drive people to seek out medicinal cannabis — including fibromyalgia pain, appetite problems, glaucoma, menstrual migraines, nausea, and sleep apnea. It’s widely marketed as a medication for all these conditions throughout the U.S. and around the world, under the trade names Marinol, Syndros, Reduvo and Adversa. The DEA considers the drug to have “low abuse potential,” and a patient with a Dronabinol prescription can get it filled at most pharmacies. 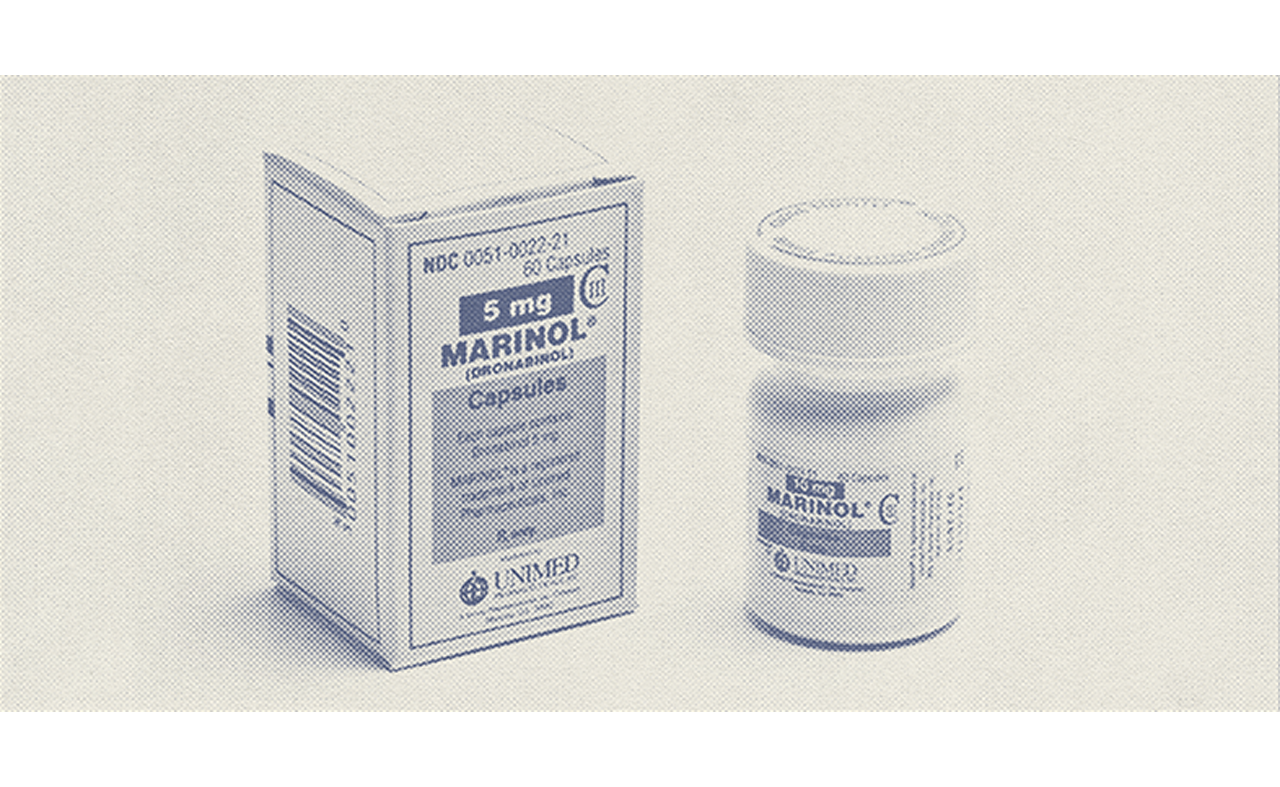 How did Dronabinol’s developers get a delta-9-THC medication legalized in 1986?

Although the DEA considers cannabidiol (CBD) derived from “hemp” plants (containing less than 0.3 percent THC by weight) to be legal, it’s important to remember that neither CBD nor THC is FDA-approved for pharmaceutical applications. The only exception to this rule is Dronabinol, which was approved by the FDA as a prescription pharmaceutical in May 1985, and was legalized by a special DEA policy statement a year later, in May 1986.

Dronabinol’s legalization is all the more surprising because it happened during the presidency of Ronald Reagan—one of the fiercest anti-cannabis crusaders in U.S. history. How did a THC-based medication manage to gain FDA and DEA approval at the height of the “Just Say No” Reagan administration? The answer has much less to do with what Dronabinol contains, and much more to do with how it was developed and marketed.

Preclinical research on Dronabinol began in the 1970s. The developer, Unimed, put up only an estimated 25 percent of the funding for preclinical and clinical testing, while the National Cancer Institute (NCI) provided a 75-percent majority. The NCI’s support proved to be especially crucial in Phase III of clinical testing (see the “regulations” section below), when the FDA required two additional studies that cost $5 million and two extra years to complete.

How Dronabinol became federally legalized has less to do with what it contains, and much more to do with how it was developed and marketed.

Even after Dronabinol gained FDA approval, it still faced unique obstacles from the DEA, which considered THC to be a Schedule-I illegal drug (as it has since 1970, and still does today). In 1985, Unimed petitioned the DEA to reclassify Dronabinol as a Schedule-II medicine, citing clinical data on its “low abuse potential” and tightly controllable dosage. The DEA agreed to a Schedule II reclassification just before the FDA approved Dronabinol for marketing in 1986.

And so, after nearly a decade, millions of dollars in clinical trials, and multiple applications to the FDA and DEA, a drug based on psychoactive delta-9-THC was federally approved as a legal medication at the peak of the Reagan administration. Today, annual sales of Dronabinol are estimated at $20 million—and it remains popular even in today’s legal-cannabis era.

What regulations do Dronabinol’s makers follow, that most cannabis vendors don’t?

If Dronabinol’s manufacturers were able to get FDA approval for a THC-based medication in 1985, and get the DEA to reclassify that medication as a Schedule-II pharmaceutical with “low abuse potential” in 1986, then why does cannabis remain a Schedule-I illegal narcotic at the federal level? In other words, why won’t the FDA and DEA approve cannabis as a legal medication today, as they approved Dronabinol back in the ‘80s?

Because Dronabinol’s developers followed the guidelines set forth in the 1938 Federal Food, Drug, and Cosmetic (FD&C) Act, which provides a strict and precise testing and licensing framework for medications seeking to enter the U.S. marketplace. In order to gain FDA approval as a pharmaceutical product, a chemical has to pass through an intensive process of drug development, which often takes a decade or more:

The three phases of clinical testing are typically the longest and costliest period of pharmaceutical development—as well as the riskiest. Clinical trials often cost several million dollars (sometimes as much as $200 to $300 million), and frequently take five years or more. A single failed trial at any stage can send the whole development process back to the drawing board, without a marketable product to show for all the developers’ investments.

A manufacturer’s failure to comply with any of these regulations can result in a loss of FDA approval, which may mean they have to include a “not FDA-approved” warning on their product; or, in some cases, may result in the product being banned from the U.S. market altogether. But today’s medicinal cannabis vendors haven’t followed the FD&C guidelines outlined above—which means their products aren’t eligible for FDA approval as legal pharmaceuticals.

If cannabis vendors followed the FDA’s regulations, would their products be federally legal?

The short answer is, yes—in theory. It should be possible for any THC-based product to gain FDA approval as a legal medicine, provided its developers follow the FD&C Act’s guidelines to the letter, proceed through the entire preclinical and clinical testing process step-by-step, file all their data with the FDA, and receive approval before marketing or selling their products.

However, the reality is that most cannabis companies simply don’t have millions of dollars to invest in multiple preclinical and clinical trials, which may take five to ten years or more before a product is allowed to be sold as an FDA-approved medication—and that’s only if the trials are successful. Plus, the risks of drug development are enormous: A single failed clinical trial can cause a small company to go bankrupt before it even gets a chance to market its product.

The risks of drug development are enormous: A single failed clinical trial can cause a small company to go bankrupt before it even gets a chance to market its product.

Still more problematically, many cannabis companies seem to be unwilling (or unable) to control the purity of their products. An ongoing survey by ProVerde Laboratories has found that the vast majority of commercial cannabis products contain THC and CBD concentrations significantly higher or lower than what’s listed on the label—and most of these products also include additional THC isomers that don’t exist in natural cannabis; while others have been found to contain as many as 30 unidentified chemicals.

“Every sample these vendors send me seems to be more contaminated than the last,” says Dr. Christopher Hudalla, ProVerde’s president and chief scientific officer, who compares many of today’s commercial delta-8 cannabis products to “bathtub gin.”

If even a mild everyday medicine like (for example) Tylenol was found to contain 30 unidentified chemicals, and to have inconsistent levels of its active ingredient from one bottle to the next, there’d be a nationwide uproar. It’d be all over the news. Millions of bottles would be pulled off store shelves. Millions of dollars in refunds would be issued. Furious customers would file a class-action lawsuit against the manufacturer, whose reputation would be permanently tarnished. They might never be able to sell medicine in the U.S. again. And that’s just for a relatively harmless, non-psychoactive headache medicine.

So the real question is: Shouldn’t we hold our medical cannabis vendors to the same standard as Tylenol?

Until cannabis growers and manufacturers abide by the same regulations as other legal pharmaceutical manufacturers, they’re unlikely to gain much traction with the FDA—let alone the DEA. But there is an alternate solution, Hudalla explains: “Just go ahead and legalize marijuana” as a recreational product, and tax it like alcohol and tobacco. Patients in all 50 states would then be free to use cannabis for its medical benefits—and the rest of us could stop stressing about it.

These statements have not been evaluated by the Food and Drug Administration. Products are not intended to diagnose, treat, cure, or prevent any disease.
Back to List
‌
Sublingual Cannabis 101: Everything You Need to Know About Sublingual THC & CBD