When it’s been a long time since socializing (we don’t need to go into why), interactions start feeling awfully pubescent with their notably stilted dialogue. Add a newly acquired access to bars and booze, and it can get messy quick. This is where Drew Martin’s botanical joints come into play—nudging people into an intimate moment, creating a relaxed, sociable buzz with a more flattering bloom.

Drew Martin conceived his entirely unique botanically blended pre-rolls with social gatherings specifically in mind. They're deliberately low-dosed and come in packs of four, nestled in a palm-sized box printed with playful, lightly psychedelic jungle illustrations that would fit right in in a Palm Springs mid-century hotel lounge. Delicate combinations of herbs like Chamomile, Yerba Santa, and Calendula, are hand-rolled with an organic sun-grown sativa-hybrid blend that maxes out at 10% THC, which is approximately half the amount of most commercially available joints.

There exists a time and place for heroic dosages, sure, but what about a relaxed backyard party, between friends on the back porch? There’s something to be said for being able to take more than two cautious puffs when the joint gets passed around and cozy into the shared moment without worrying about accidentally entering the blaze-of-no-return.

But let’s be clear: these aren’t your parents’ hippie herbal smokes with that mythical ‘60s schwag; Drew Martin pre-rolls are meticulously crafted by award-winning mixologist Drew Martin Gosselin, who also happens to be a trained herbalist. 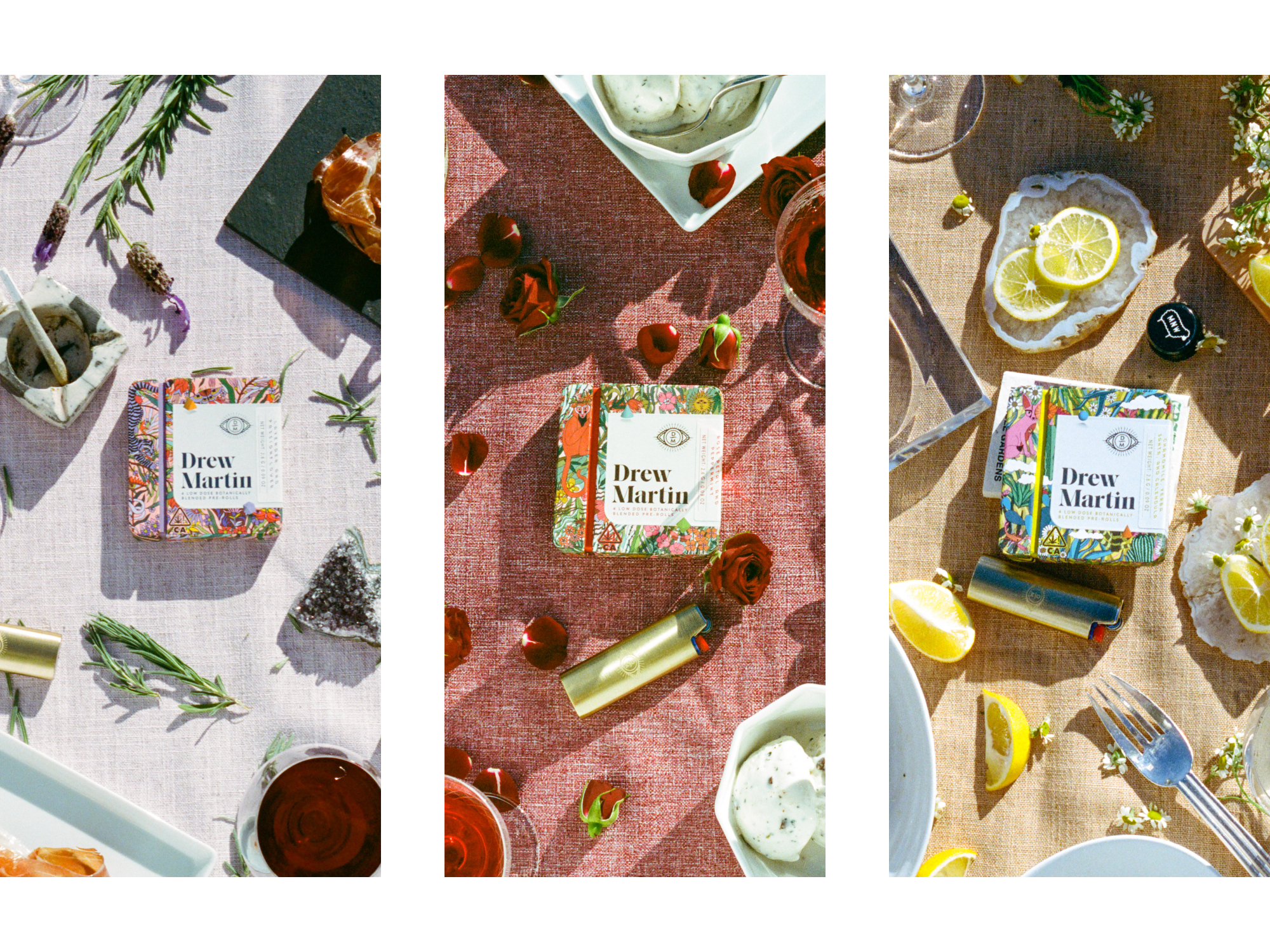 A botanically infused return to ritual

The Drew of Drew Martin lived nomadically around the world for 10 years and found himself resonating with the sense of community and culture built between people and plants. Through his travels, he says, “Cannabis was the one that really stole my heart"; the plant became a throughline in some of his favorite experiences around the globe, as he harvested it in the mountainsides of India and Nepal, and "pounded hash with 80-year-old women in Morocco."

“I wanted to build the whole project around the ritual of smoking,” Drew says. “There’s something really intimate, magical, and special about the ritual of passing the joint around. Obviously, it’s something we’ve done for thousands of years.”

The ever-present use of cannabis across ancient cultures may indeed be obvious, but the lineage of smoking as ritual has also been greatly diluted over the years, at least in the commercialized world of cannabis. So instead of engagement with cannabis being a means to an end—“the end being getting really high”—Drew says, "We wanted to flip the script and let the emphasis and the focus be on the process, the ritual. The experience and intimacy that you can build with the people around you engaging in it." 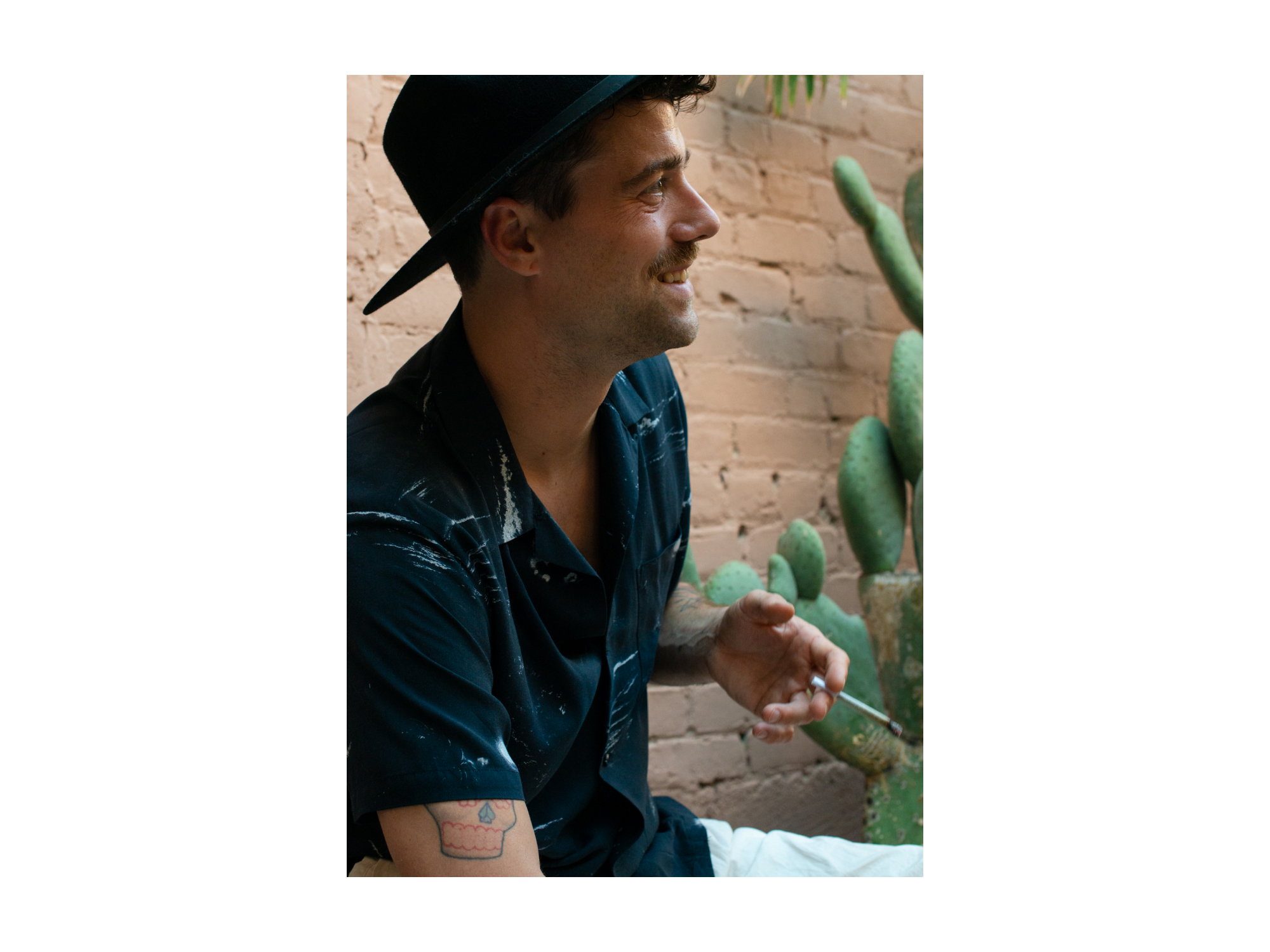 And why not? When you light a Drew Martin pre-roll, the scent lingers in the air, like incense. The slow smolder of cannabis flower, lavender buds, and passionflower quietly envelops you and your companions. And the lower dose means prolonging that connective social spark, that elevating shared ritual.

Drew’s rich past life includes a yearlong residence at a rural queer commune, where he trained under a resident Cherokee medicine woman who foraged and processed herbs for the commune apothecary. It inspired an interest in furthering his formal training in Traditional Western Herbalism, and soon, Drew was holding a private practice as an herbalist.

The flower within the joints are all sun-grown and harvested by hand at two partner farms in Mendocino and Humboldt, both women-owned. Drew shares that not only is the direct connection with the farmer important to ensure the quality of the flower, but also the “energetic component to the flower, to know that this was something that was really softly and carefully grown.” The reason for the uniform sativa hybrid blend came back to that social intimacy aspect, to ensure that the high you get from a Drew Martin joint is "a very comfortable, uplifted experience."

This is not to say that he doesn’t pay attention to strains. Absolutely striking in Drew’s approach is how he creates a “bouquet of the terpenes by pulling in the different strains together at different levels, to create something entirely kind of new.” He likens his strain selection to the process of making non-vintage Champagne (which is 95% of Champagne, mind you), which includes blending harvests from different years and different farms to create, as he explains, a sense of balance and consistency. To rephrase: the flower in the Drew Martin joints, sativa-dominant and strains unspecified, is in fact, a fine-tuned composition specifically tailored for the botanic blends. 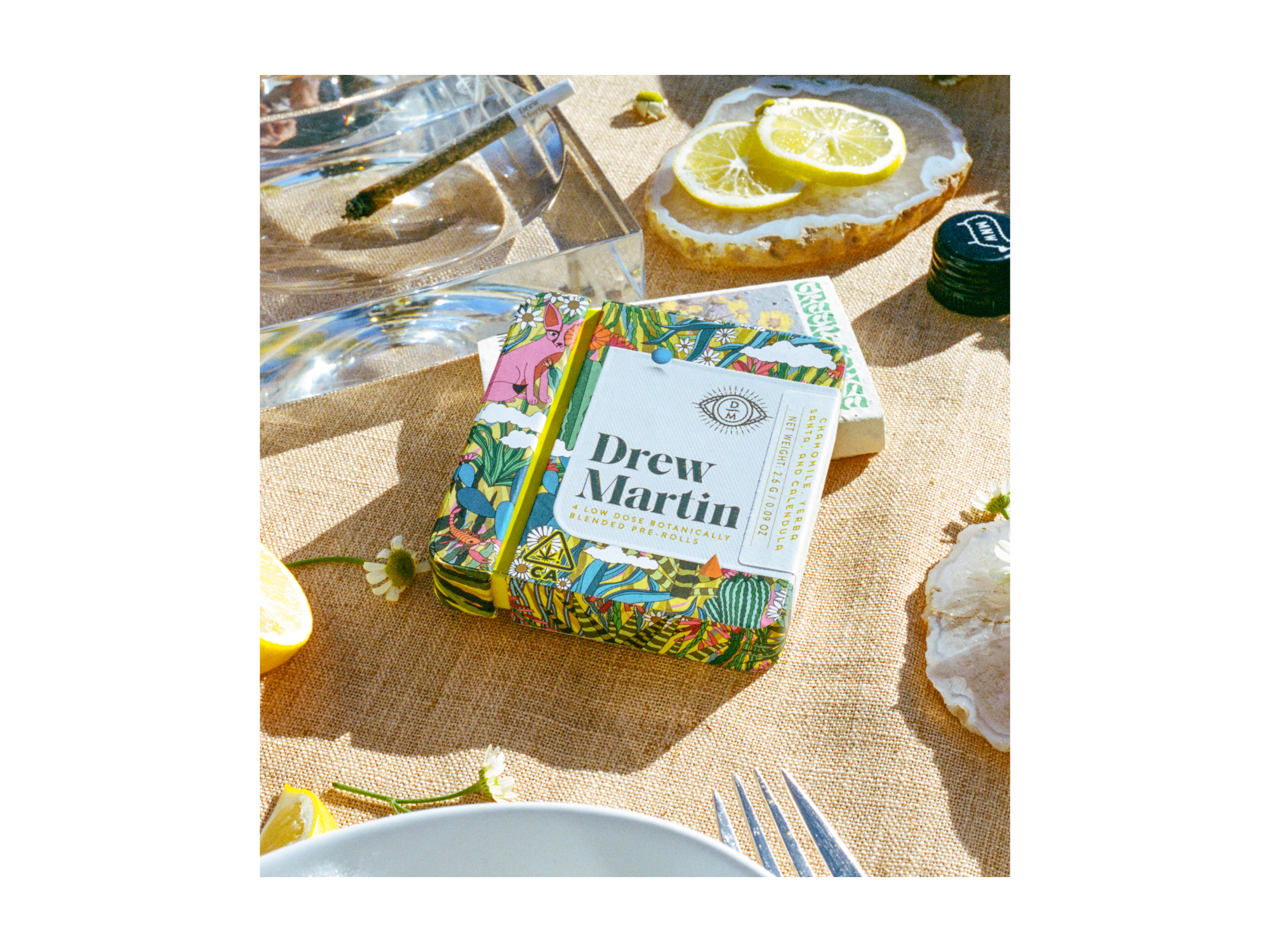 A deepened sensory and social experience

When you focus wholly on beautiful sensory cues, sometimes time seems to stop still, and you almost can’t quite distinguish between the pleasurable sensation, its immersive space, and you. Coffee, wine, chocolate, lemon-ginger joint? Why not! Drew concurs, “I'm a proponent of smoking cannabis in a thoughtful way, and in a way where you understand what's happening. The benefits that you're receiving from the plant and from the botanicals in this case, I think, are really beautiful and fantastic.”

It’s clear Drew has taken utmost consideration for the pairings, drawing from his other past life as a renowned mixologist. At the James Beard award-winning Compere Lapin, he curated the selection of liquors and crafted the cocktail list. In a way, he’s always curated sensory experiences for others through novel flavor combinations, with the added zing of a psychoactive tint.

When it comes to the senses, though, you learn to let go of control and let instinct guide. Each person’s olfactory response is specific to their lived experiences—a memory trigger found to be possibly stronger than our sense of sight. And Drew leans into specific, personal recollections in his creation process.

On the Rose Petal and Peppermint blend, Drew reminisces, “Roses always take me back to my mother tending garden when I was a kid. She had these big, massive plots of rose bushes. But peppermint, on the other hand, triggers really specific memories for me in Morocco and North Africa, sipping tea every afternoon at 3 P.M. like clockwork.” Fittingly, the brand's description of that transportive pre-roll is "like dawn on a summer day." 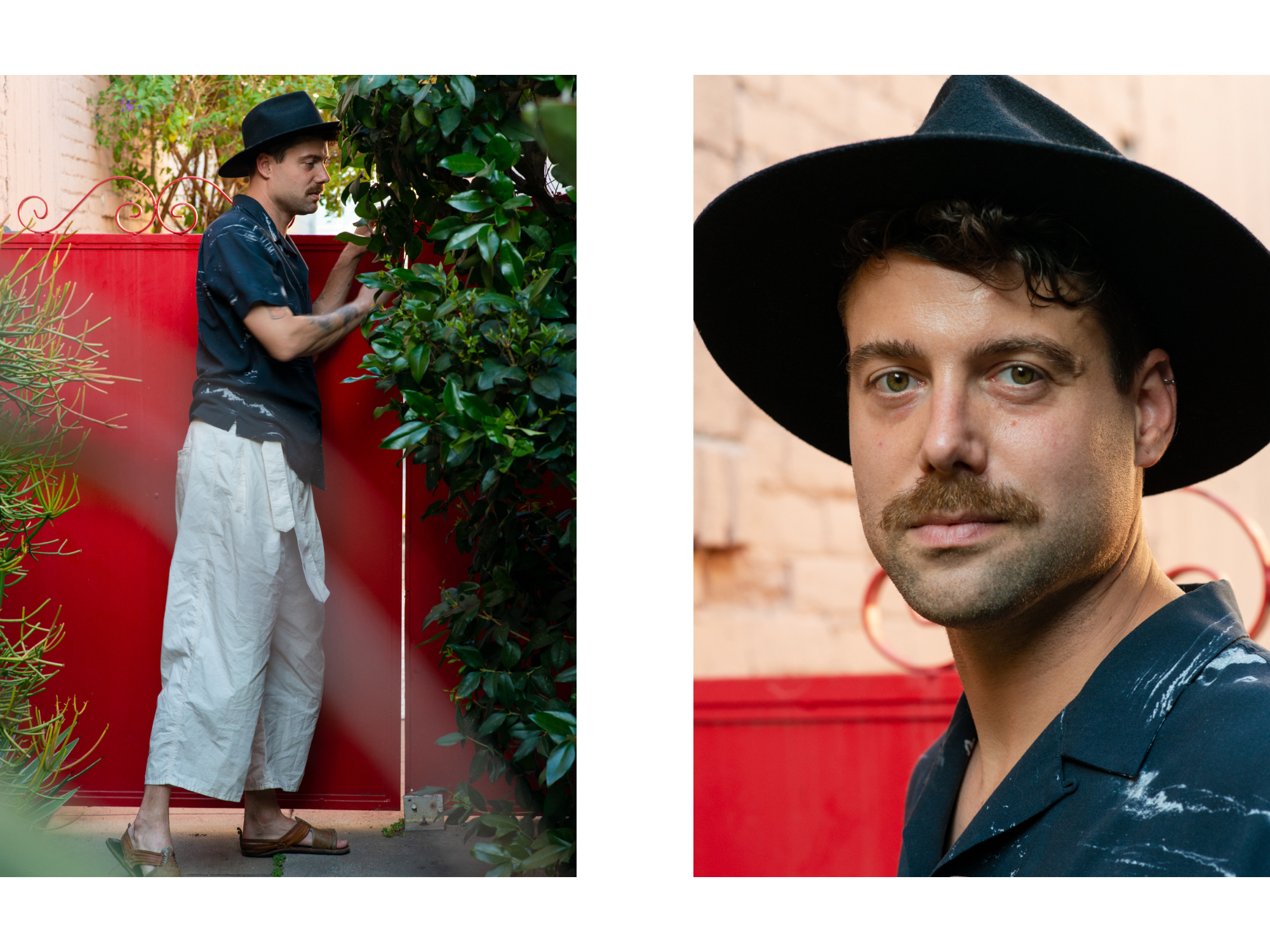 Fragrance has a tendency to disarm total strangers into revealing the most embedded moments in their lives. No matter what, or who you are, it's common for people to inevitably proclaim, “This reminds me of…” The immediacy of the physical experience feels so deeply intimate. And these fragrant botanicals contribute to a multidimensional experience where we, perhaps, can make ourselves a little more vulnerable to each other.

Even pre-pandemic, we mostly passed by others without breaches in personal space. So it’s somewhat magical when an object can become a conduit that brings our bodies together—a sanctioned, consensual moment of intimacy. Passing a joint back and forth is a social ritual, not a discreetly dosed mint. It makes perfect sense that Drew would describe his practice as “the intersection between the sensory and the social." For him, it's about "creating the sensory experience that lends itself to be a social experience."

It’s far from the stereotype of the alienated lone stoner: “It’s not about escapism; it’s about the exact opposite. It’s about deepening the interactions we have with people and with ourselves.” This spirit of communion is at the foundation of the company, too: Drew Martin was started by Drew, his life partner Andrew Freeman, and business partner Nicholas Pritzker, who became a dear friend to all. Their warmth is palpable, notably each has had previous successes in different fields of hospitality and experiential. 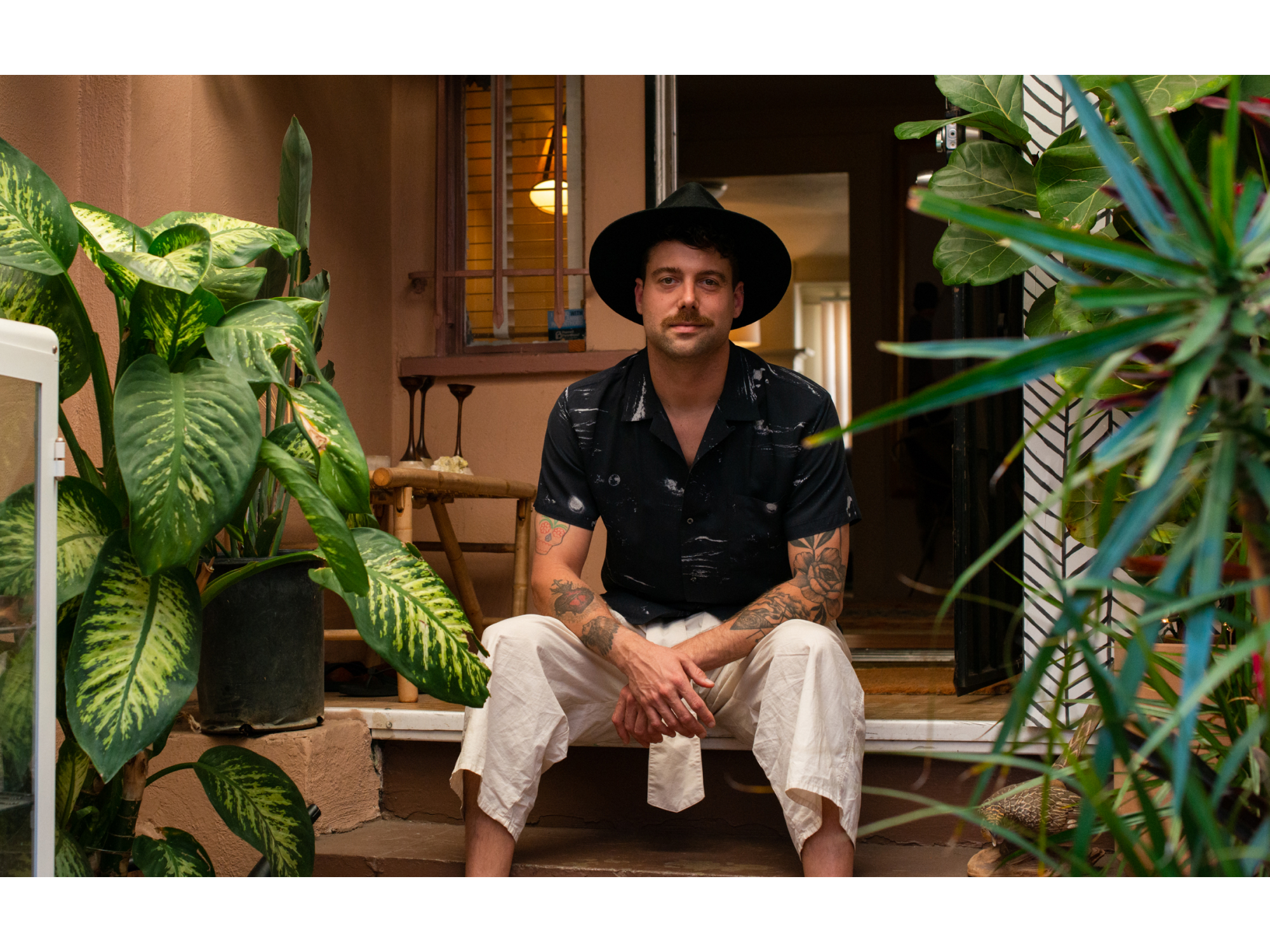 You almost forget that Drew Martin is only just beginning, after weathering the pandemic in their first year as a company. Right as they had prepared for a shared workspace, sudden creative adjustments had to be made to observe best safety practices. So, during those fateful months of spring 2020, the Drew Martin team worked nights in their shared Los Angeles warehouse, rolling joints by hand from midnight to 6 A.M.—a moving show of solidarity, perhaps grounding in many ways, but also absolutely bonkers. After a soft launch in April, Drew Martin fully launched forward in May, right in the eye of the storm.

We all ended up on Zoom, but Drew Martin’s ingenious Zoom virtual "salons" actually popped off, gathering strangers on shared screens, imbibing botanical pre-rolls paired with gloriously customized cocktails and dark chocolates from a crafted gift box sent to each attendee. They made the presses, with good reason, and the rest is history—with much still being written.

As cynical as we can be about the corporate co-opting of Pride Month—about queerness reduced to a marketing slogan—some of us are old enough to remember a time before U.S.-sanctioned homo-monogamy, and thus begrudgingly swallow the rainbow-washing like medicine.

But back in those days, what queerness really meant, at least to young suburban teens like yours truly, was the promise of possibilities beyond institutionalized indoctrination. A right to play, without having to justify its value towards sustaining the existing system. To take a moment, stop worrying, and just light up a damn ginger root-lemon balm-damiana joint with the beautiful people around you.

Julia Savignano is a culture, wellness, and culture of wellness writer living in Los Angeles. She doesn’t have a dog but wishes she did.

Shop Drew Martin pre-rolls at a MedMen near you.

These statements have not been evaluated by the Food and Drug Administration. Products are not intended to diagnose, treat, cure, or prevent any disease.
Back to List
‌
Everything You Need to Enjoy Labor Day

‌
High on History: Victorian Medical Marijuana and the Doctors Who Brought It to Europe