Since the dawn of American counterculture, cannabis has connected and fueled creative minds. In the jazz clubs of the 1920s, this potent plant inspired some of the twentieth century’s most daringly original music and literature—redrawing cultural boundaries every step of the way.

Even as racist opponents sought to demonize cannabis by linking it with communities of color, “reefer” was helping foster artistic forms that would permeate all areas of American culture right down to the present day. In fact, journalist Norman Mailer named cannabis the “wedding ring” in a multi-ethnic marriage of music, poetry and slang—a marriage whose children include rock music, the Beat Generation, and even the word “weed” itself.

What role did cannabis play in the evolution of jazz music and culture? Let’s peel back the propaganda, and take a dive into America’s jazz-age underground.

A burst of creative improv

The roots of cannabis run deep in American soil—so deep, in fact, that it’s hard to know where to begin. As far back as the 1600s, colonial farmers grew the plant for its hemp fibers, while enslaved African people cultivated its flower for smoking. Throughout the late 1800s, American and European intellectuals regularly ate hashish at society gatherings, and pharmacies sold (surprisingly modern-sounding) “hasheesh candy” formulated to enhance energy and focus.

It was these mental enhancements that first drew jazz musicians to the leaf. As early as 1909, a young Louis Armstrong referenced “marihuana” in his lyrics, and he later credited the plant with improving his musicianship, saying it gave him “much better thoughts” than the blurry buzz of liquor. In underground clubs and bordellos of the 1910s, cannabis inspired bands to improvise freeform variations on well-known melodies—sparking the evolution of jazz as a brand-new musical form.

Cannabis served as an ideal fuel for jazz’s in-the-moment improv, its radical originality, and its freeform explorations of melodies, rhythms, and scales.

What was it about cannabis that meshed so perfectly with jazz music? In his book The World in Six Songs, music psychologist Daniel Levitin explains that tetrahydrocannabinol (THC) disrupts short-term memory and slows down our subjective perception of time—keeping musicians grounded in the present moment, tightly focused on each individual note they play. THC also creates random neural “noise” or “static” throughout the brain, which appears to open up new possibilities for improvisation and creativity.

In other words, cannabis served as an ideal fuel for jazz’s in-the-moment improv, its radical originality, and its freeform explorations of melodies, rhythms, and scales from European, Caribbean, and African musical traditions. And like every great musical revolution, jazz soon gave birth not only to new styles of composition, but to its own underground subculture. 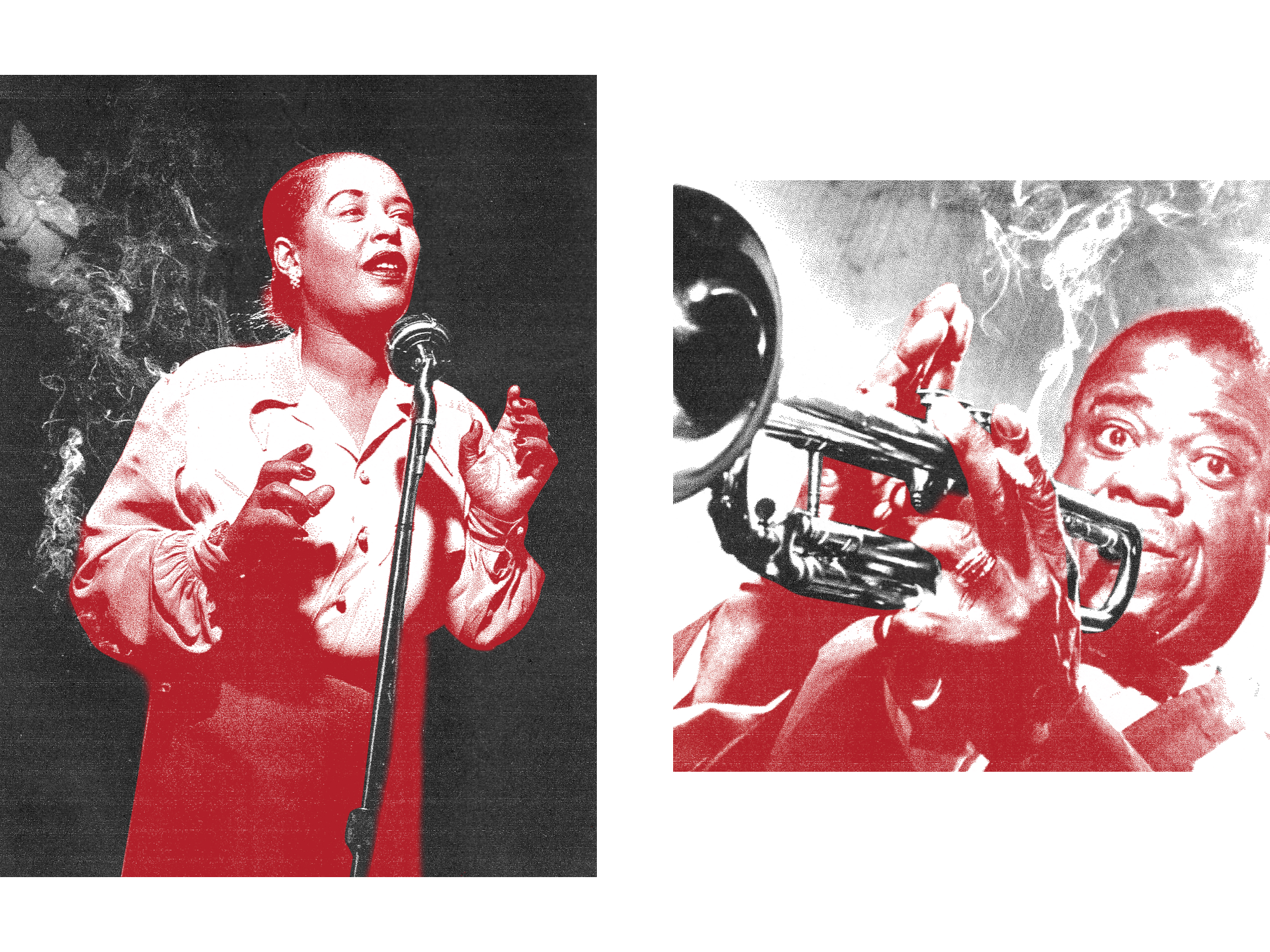 A revolution in musical culture

While “reefers” were initially little-known outside the jazz community, club owners quickly realized they could make a bigger buck by monetizing jazz culture’s more mind-altering side. In a later interview, Armstrong said, “We called ourselves ‘vipers’, which could be anybody from all walks of life that smoked and respected ‘gage’—that was our cute little name for marijuana."

By the early 1920s, “vipers” were flocking to jazz clubs not only for the mind-bending music, but also to ask around for “muggles,” “muta,” “gage,” or “tea.” Hit songs like “Reefer Man,” “Jack, I’m Mellow” and “Pot Hound Blues” celebrated weed-fueled parties in slang only insiders could decipher: “If he trades you dimes for nickels / and calls watermelons pickles / then you know you’re talkin’ to that Reefer Man.”

"It really puzzles me to see marijuana connected with narcotics dope and all of that stuff. It is a thousand times better than whiskey. It is an assistant and a friend." - Louis Armstrong

In fact, jazz musicians were convinced that a good high was necessary not just to make great music, but even to “hear it right” as a listener. Many audience members agreed—including poets and novelists who wrote about the ecstatic musical journeys they experienced at jazz clubs. Black writers like Ted Joans and LeRoi Jones came of age in the jazz underground, whose aesthetics shaped the Beat Generation poetry for which they became famous.

Many jazz musicians were also keenly aware of their work’s political implications. For example, when singer/songwriter Billie Holiday performed her song "Strange Fruit" (about lynched Black bodies) in Manhattan in 1939, the newly formed U.S. Bureau of Narcotics sent her a personal threat: “Stop singing this song” or face the consequences.

To her eternal credit, Holiday bravely ignored the threat and kept performing the song, both for Black and white audiences—forcing listeners to confront the brutal realities of Jim Crow persecution. In 1999, Time Magazine recognized "Strange Fruit" as the “Song of the Century,” acknowledging its profound influence not only on jazz music, but also its power in helping shape the national conversation around civil rights.

And Holiday wasn’t the only jazz musician whose work expanded America’s cultural consciousness around the freedom struggle. Charles Mingus’s song "Fables of Faubus," for example, called out Arkansas governor Orvil Faubus for calling in National Guard troops to prevent the Little Rock Nine from attending their recently desegregated high school. Twenty years later, Gary Bartz’s song "Uhuru Sasa" boldly denounced the drafting of Black Americans into the Vietnam War, declaring, “Hell no! I won't fight your filthy battle no more / Hell no, because I've got some battles of my own to fight for.”

Along the way, jazz was also nourishing the development of a brand-new musical genre: hip-hop. Beginning in the late ‘70s, hip-hop producers instinctively reached for classic jazz records when they wanted melodic samples—while swing rhythms served as precursors to the distinctive “boom bap” groove of East-Coast beats. Rapper and producer Kendrick Lamar, in particular, has cited jazz musicians like Miles Davis and Herbie Hancock as formative influences on his own songwriting process, explaining that he “thinks like a jazz musician” when developing albums such as 2015’s award-winning To Pimp a Butterfly.

Jazz music itself also continued to survive and flourish, even as it gave birth to an ever-expanding kaleidoscope of new genres. And while the road to cannabis legalization would still be a long one, jazz culture had made it clear that “reefer” was here to stay—and that it had transformed American society for good.

Ben Thomas is a journalist and novelist who's lived in 40+ countries. He specializes in telling stories from the frontiers of science, history, culture, and the cosmos—and the points where all these fields intersect. Find him on Twitter at @writingben.

These statements have not been evaluated by the Food and Drug Administration. Products are not intended to diagnose, treat, cure, or prevent any disease.
Back to List
‌
Travel Report: 36 Hours Stoned in Santa Rosa

‌
Everything You Need For the Memorial Day Weekend

‌
6 Comedies That Are Even More Hilarious If You’re Stoned