Allegedly once titled “The Being John Malkovich of All Pot Smoking Stoner Movies,” Smiley Face debuted in 2007 as an instant cult classic. It’s not only the funniest, most fucked-up stoner movie to watch while stoned, it's a sharp, yet ambivalent existential depiction of time as a material to be wasted with pleasure and elasticity in the enduring universe that is 2007 America. Smiley Face resists having a coherent takeaway message, despite its overt recognition of Marxist ideology and pop Americana. Every moment that slips into the beginnings of what does it all mean anyway? flails back to buoyant absurdity, ineptitude, and incoherent material circumstances. The movie, much like its leading woman Jane, is all about the ride.

Smiley Face is a model hyperreal stoner movie and buoyant follow-up to director Gregg Araki’s tragic and compassionate Mysterious Skin, starring Anna Faris as a burnout pothead with an economics degree who odysseys across Los Angeles attempting to run errands after unwittingly eating an entire tray of weed-laced cupcakes. The frenetic style of Smiley Face toggles back and forth between the psychedelia and paranoia of protagonist Jane’s intense waves of THC-saturated cognition and a sober realism that reveals how ridiculous she looks. The narrative structure and visual style truly immerse the viewer into the edible trip and its hallucinations, but routinely yank us back out to objectivity for the gag of it. Watching the film is like sitting on the membrane of a portal between worlds, chilling on a couch and doing bong rips.

Araki loves meta context, and Smiley Face wrangles a cast of supporting characters including Danny Masterson—right on the heels of weed-heavy That '70s Show—as Jane’s odd roommate with the threatening aura of any man who would wear a short-sleeved white ironed button-down in Venice Beach. Adam Brody also stars as the only pot dealer in the world who takes an IOU, fresh off of playing Seth Cohen on smash-hit teen soap The O.C. in an absurd hat-wig of dreadlocks. When Adam Brody pops up, it’s particularly amusing, at least to me (the world’s foremost The O.C. scholar), because it recalls one of the funniest late-season O.C.-dropped plot lines: when Seth suddenly develops an after-school-special-style “pot problem” because he didn’t get into Brown.

Written initially under an anonymous pseudonym by Dylan Haggerty, whose other IMDb credits include minor guest roles in Star Trek, The X-Files, and 24, voice acting on Spongebob, and story-writing credits on three episodes of Adventure Time. It makes perfect sense, because Smiley Face blends the pure id and imaginative absurdist humor of Adventure Time with the dark horrors of sci-fi via campy aesthetics in Araki’s signature pop-apocalyptic style. The synthesis of Araki and Haggerty's minds is best exemplified in the scene where Jane hallucinates a man in a Party City devil costume in her rear window and subsequently shrieks and crawls out of her car, rolling onto the floor of the parking garage.

The unstable vibes of Smiley Face somehow manage to authentically tap into the experience of being way too blitzed off of homemade edibles and trying to do normal things, like pay for the bus, deal with interpersonal conflict, or do, like, really any two things at once. The high makes everything brighter and weirder and more delightful, but also makes things disorienting, threatening, and terrifyingly hideous. Unlike other stoner movies, Jane’s trip isn’t one note of giggly bliss and palship—though there is plenty of that in waves—but rather glides with the weed trip's highs and lows. It’s usually hilarious when Jane is freaking out, but eventually her hijinks crescendo and become more akin to an Uncut Gems anxiety-ridden situation of flailing combustible stress. 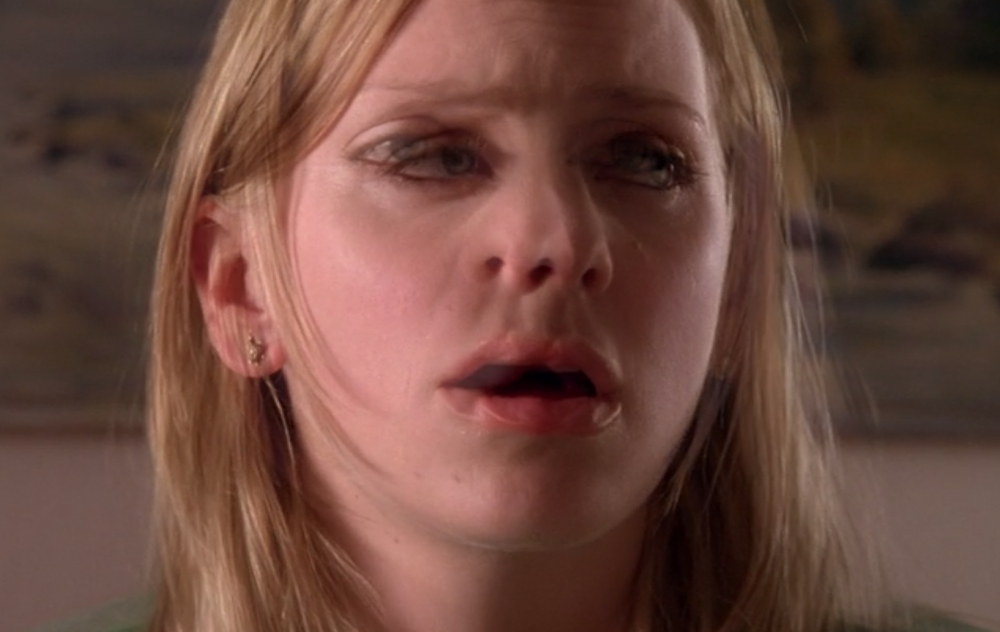 Smiley Face feels like a cross between your typical stoner comedy and the other top genre beloved by stoners: trippy surrealist films like 2001: A Space Odyssey and The Holy Mountain. It’s as laugh-out-loud funny as it is wait... whoa. Much like the symbol of the smiley face—a rudimentary yellow circle with two dots and an upturned curve—the film’s energy is silly, familiar, and increasingly demented the harder you look at it.

Jane’s story begins with her playing a video game on her laptop and doing bong rips on the couch, muttering, "This game is so fucking cool when you’re high." Araki uses hilariously clunky transitions, from a cliché circular water ripple over the screen to a too-fast zoom to the Windows Media Maker-esque wipe or flip; it's a perfect visual expression of that stoned augmented-simulation-of-life feeling, and the conditions of being and relating to world that make that feeling so appealing in post-industrialized America.

After Jane accidentally eats an entire tray of weed-soaked cupcakes, she forms a list of tasks she must complete to get herself out of trouble—though of course, the trouble only escalates. She has to pay the power bill, replace the cupcakes, and make it to an audition (she’s sort of an actress). Her plan, entitled "Jane’s Plan," goes as follows: 1. buy more pot 2. use the money Steve left for the power bill to pay for the pot 3. go to the audition 4. i’ll be even more in touch with my creative self!! 4. hit the cash machine, zip on over to pay that power bill, pick up cupcake supplies at the store and head on back home base to bake ’em up! Jane’s way of thinking follows a kind of disoriented video game quest logic, full of surprise puzzles, side journeys, and conflicts—much like the experience of tackling your to-do list while unbelievably baked.

The characterization of Jane represents a particular kind of cynical American burnout that’s emblematic of post-9/11 American youth culture. But she still holds up today in our increasingly volatile economy with its alienating labor structure. Case in point, while Jane hits the bong, Seth Cohen's pot dealer character says, “It’s all about capitalism and shit like that you know? Who creates the jobs and where they come from. The profits I make for example trickle down through the economy in ways I can’t even comprehend… it’s simple Reaganomics applied to the production of hemp.” Jane then reveals herself to be a former economics major who graduated summa cum laude and debates with her dealer while high as a freaking kite, even using phrases like “laissez-faire paradigm.” In her words, “Economics didn’t really work out.”

One of the film’s funniest gags is when Jane finds herself in possession of a first edition copy of The Communist Manifesto, falls asleep with it in the back of a sausage truck, and impersonates a union organizer (at the sausage factory, no less) as she rails against labor exploitation. In her imagination, she says: “It is a tale as old as man. The history of all hitherto existing society is the history of class struggle. Free man and slave. Lord and serf. In a word, oppressor and oppressed. Stood in constant opposition to one another, carrying on an uninterrupted fight—a fight that each time ended in either revolutionary reconstitution of society at large or a complete and total ruin!”  But in actuality, she says: “You think you’re so… Um … ah… Jesus! And then you go on and on about this and that and all this other bullshit! And all I have to say is: fuck, man! I mean… this situation is totally fucked! With a capital! I mean… have you ever… do you like even… do you?”

Jane is characteristically ill-suited for the workforce, if not self-sufficiency writ large, though her nonconformity does come across as intentional to a certain degree. She presents shrewd criticisms of capitalism and normative labor-power relations, but scoffs in disgust at Marxism and Communism as an ideology. Having nothing to hold onto other than weed, Jane remains in an interstitial space between simply existing as a body and truly interacting with the world, engaging in being and becoming. Struggling to adapt to adult life is at the core of Jane’s being: she recently took clarinet lessons after a period of “depression followed by acute anxiety” to try to rekindle her childhood memories, but quit because it “turned out to be hard.” From a neoliberal perspective, Jane is a waste of potential, but Smiley Face presents her more as a byproduct of an impossible and unlivable system whose smartest move is opting out and living in the high.

Jane imagines herself baking the cupcakes in a short dream scene as a coiffed, wax-figure-like '50s housewife. Probably my favorite sequence in the film is when Jane answers her baby pink flip phone while making cannabutter on the stove, which then starts to burn and triggers the smoke alarm. She yells “Shut UP!!!” at the smoke detector and throws her phone at it, landing in the frying pan full of burnt, bubbly, gooey, mossy-green weed fat. The shot of an open baby pink flip phone submerged in burnt weed goo on one of those all-too-familiar white '90s stovetops is perfect, and so disturbingly feminine in contrast to the 1950s feminine Americana in Jane’s mind. Jane is smart, yet deeply incompetent and unmotivated—too high to manage two tasks at once. She’s a young woman whose path didn’t “pan out,” her feminized tech reduced to debris along with her potential as a functioning member of society. With the whole ounce she just purchased gone to waste, she resorts to dig into her emergency stash: an unopened baggie of medical-grade weed at the bottom of a pink-and-purple child’s jewelry box, a recognizable residual object from girlhood.

Though Smiley Face is hardly invested in gender commentary, Jane is unique as a female protagonist in the stoner flick genre, slipping into fantasies of feminine performance, surrounded by the occasional quintessential feminine object, and utilizing the time-old trick of sex appeal to get guys to do stuff for her. Jane, in her potently saturated candy apple red hoodie, appears entirely disinterested in sex and romance, in contrast to the fantasies men around her have of her and even her own housewife fantasy. Not only is Jane de facto removed from functioning society due to her refusal to comply with most basic social contracts, her lack of adherence to gender expectations and gender relations alienates her even further.

In this sense, Smiley Face gets to the pure heart of the burnout stoner mindset: a commitment to the peace and simplicity of general social removal, alienation from one’s relational identity. As narrated by Roscoe Lee Brown, Jane did not want to contribute to the pain and misery of the world. This implies that by extension, participation in society inherently will contribute to suffering. Jane’s refusal to participate in society in a traditional sense, or regard anything with much value other than its immediate sensual pleasure, is a philosophy of the end times.

Smiley Face is an epic of disoriented youth by way of the female stoner, a highlight in its commitment to the insane, reverence and fondness for stoner logic, and buoyant humor carrying with it a meaningful depth of timely provocations about the why of stonerdom.

These statements have not been evaluated by the Food and Drug Administration. Products are not intended to diagnose, treat, cure, or prevent any disease.
Back to List
‌
Mood Boosters to Gift Yourself, If You Live in Arizona

‌
Runner's High: The Transcendent Joy of Running on Edibles

‌
The Photo Initiative Healing Those Targeted by the War on Cannabis

‌
Halloween at Home: The Best Edibles for Delivery