Working in the cannabis industry is already considered to be on the fringe of society’s norms, especially when compared to the traditional concept of a 9 to 5 corporate job. That's where high-potency flower and extract brand Space Coyote is truly in a league of its own with how they've committed to operating their company, from sustainability initiatives to employee wellness.

Space Coyote co-founders Libby Cooper and Scott Sundvor have a unique approach to business that sets them apart even in the cannabis scene—from their job titles to their unabashed stoner pride—and it’s especially refreshing during a time when the culture of the workplace has become examined under a more critical lens. Work-life balance, or, the lack thereof, has been a topic of discussion among industries across the country, so when a company puts their community first from the get-go—and really takes action in innovative ways—it’s worth seeing what they're all about. 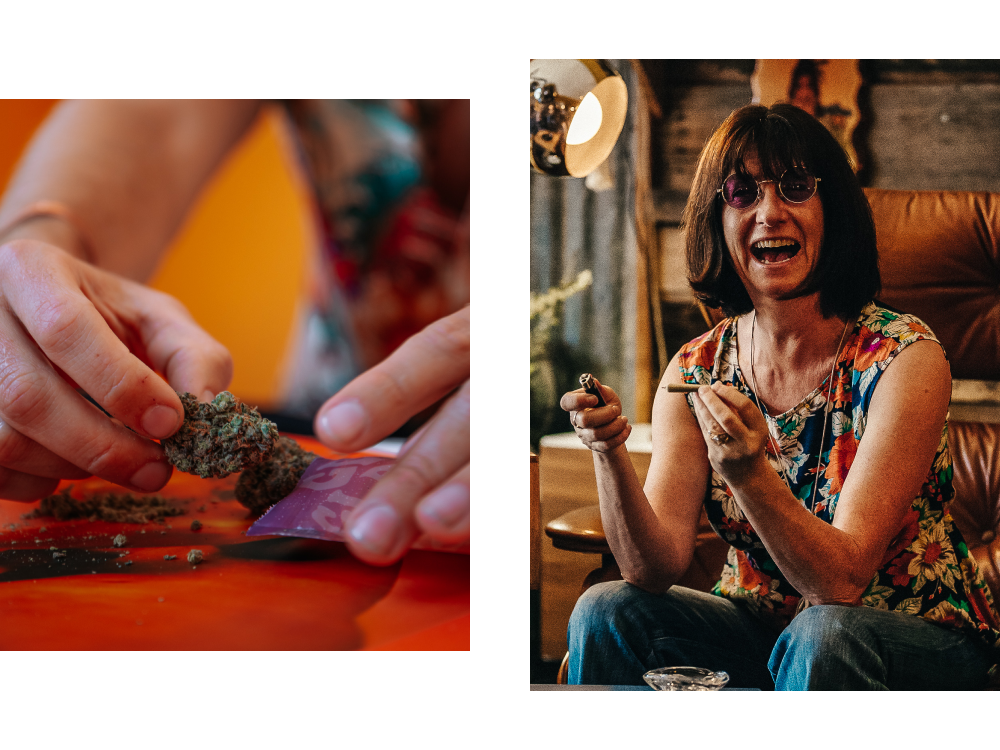 First, it’s important to know that Cooper and Sundvor embrace the fact that they are true stoners, a label that some shied away from when recreational cannabis was beginning to be legalized. “We actually say that we’re not for beginners and we really lean into it,” says Cooper, who had already had experience working in the cannabis industry as the creative director of Eaze. “That's one of the things that we just want to really lean into and change, like, you can be a stoner and be a high-powered executive and a really successful person, just like you can be a high-powered executive and have a glass of scotch at night,” says Sundvor. “So we really just value stoners and want to cater to them as much as possible.”

“You can be a stoner and be a really successful person, just like you can be a high-powered executive and have a glass of scotch at night."

Libby says that sometimes she thinks that “the stigmatization story” in cannabis is outdated and no longer relevant, but has found that people are still hesitant to talk about smoking weed; it's something she discovered when her team began to look into starting an influencer partnership program. “We're actually still the minority, so it’s important to keep talking about that,” she says.

Space Coyote is known for its incredibly potent, extract-infused pre-rolls that would satisfy those with stoner leanings like Cooper and Sundvor. “High quality ingredients and extracts that had the same level of quality and brand recognition as a dab customer would consume—that's what we wanted to put into our joints,” explains Cooper. “So we made the promise of no distillate and no shake.” Cooper says that they ended up loving their product so much that they don't really smoke anything but Space Coyote. “I feel like a snob,” she laughs. The brand’s newest offering is a high potency flower line that features seven-gram bags of the following cultivars: Cheese Danish (hybrid), Collie Man (indica), and Banana Dream (sativa). 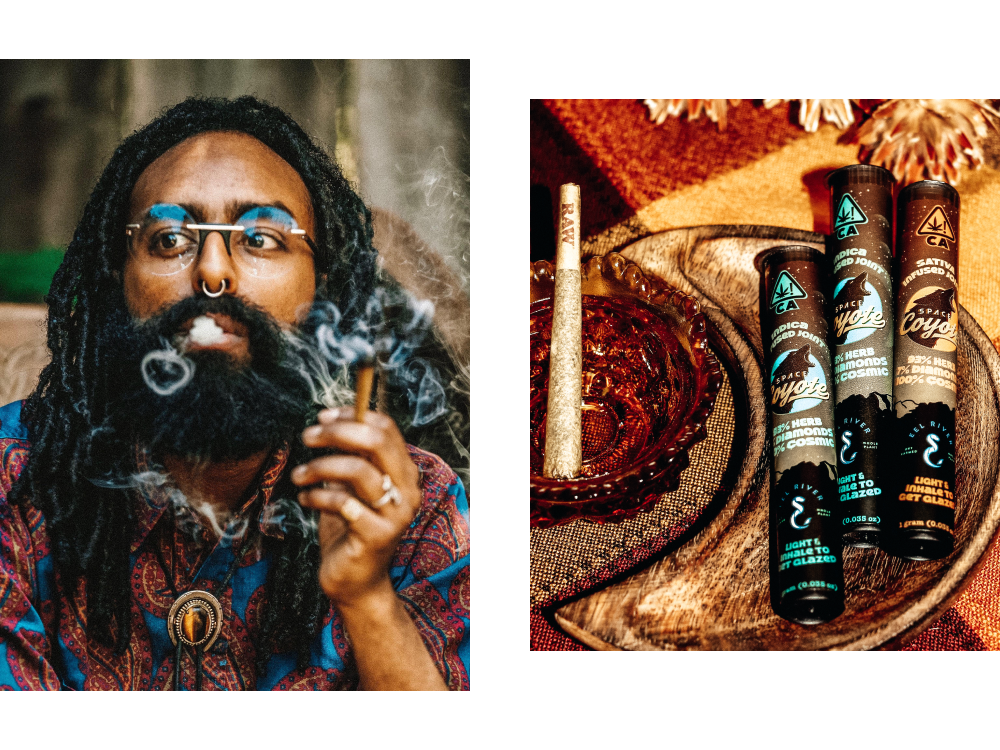 There’s also the brand’s recently launched “passion project,” the Sativa Preservation Society, which is a response to the lack of true sativa strains in the market. “I call myself the Sativa Diva, because I really don't like smoking indicas, it just doesn't work with my body,” says Cooper. She says she was dismayed going into dispensaries and realizing that you can't really find true sativas anymore. Instead, everything is hybridized, whether it’s an indica-leaning hybrid, or sativa-leaning hybrid.

Cooper says they began to investigate why it was happening (long story short: it’s due to the sativa growing process being much longer and more complicated) and they decided to celebrate and protect the legacy of sativas at the risk of cannabis becoming a "monocrop"; they've been collaborating with POSIBL Farms, a cannabis grower that focuses on sustainability, state-of-the-art technology, and organic agricultural processes. The first Sativa Preservation Society release features three Haze strains: Cuban Black Haze, C5 Haze, and Uptown Haze.

Cooper and Sundvor found cannabis as medicine via their respective autoimmune diseases; Cooper has Celiac Disease and Sundvor was diagnosed with Crohn’s. “[Cannabis] really improved my life so much on the medical side, and when I really started to connect the dots, that's when I got really passionate,” says Cooper. While traditional treatment helped Sundvor’s symptoms, it didn’t come close to how he felt after trying his college roommate’s pot brownies. “I'd heard about medical cannabis and people using it for different things, but that was the first time that it really connected for me—when I'd been on all of these different pharmaceuticals, but none of them had had the same type of effect that cannabis alone did,” he says. 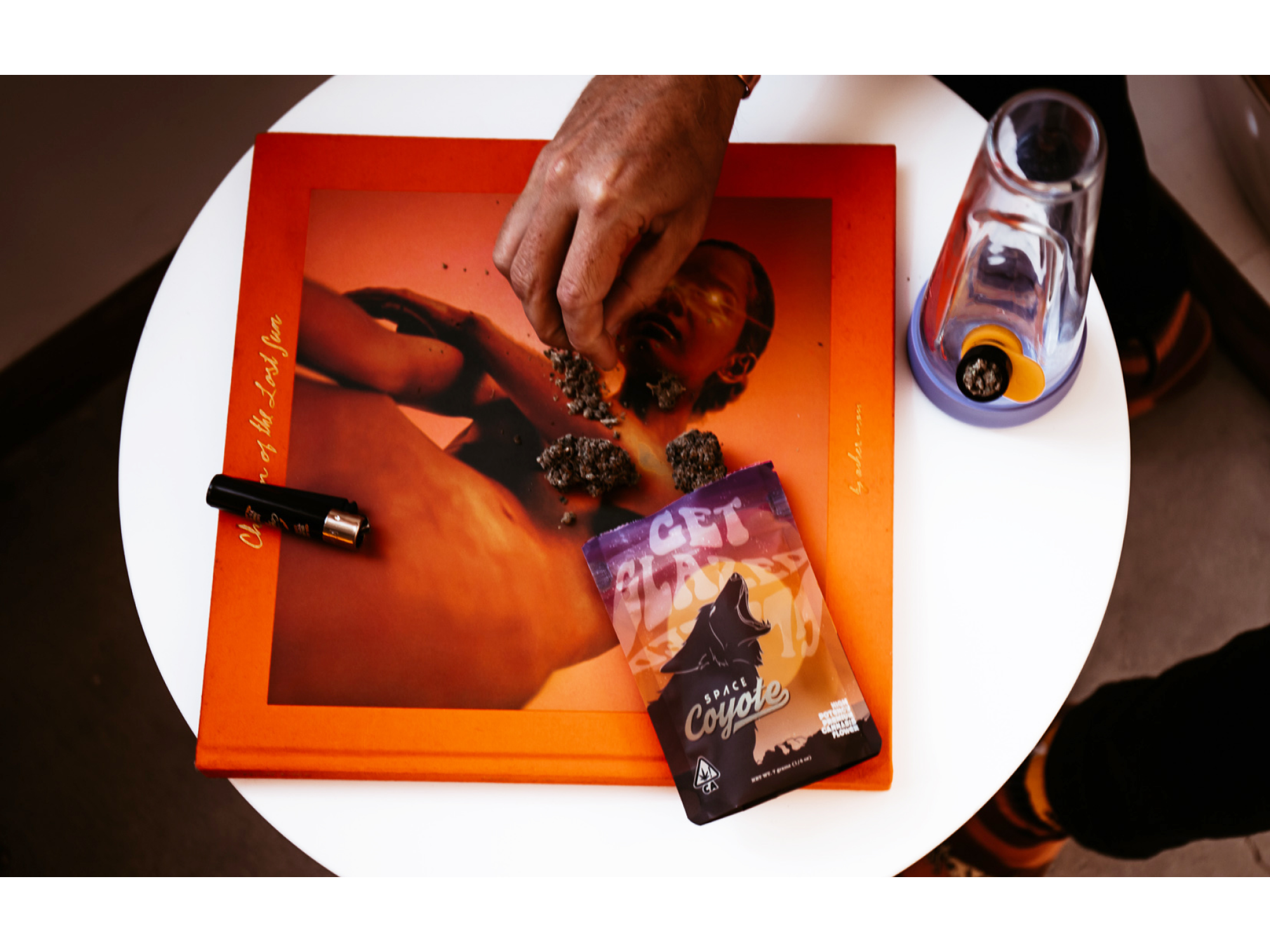 Health would become the first impetus for how they would run Space Coyote, which they launched in 2018. Sundvor’s previous job was at a company that was focused on helping people with food intolerances and allergies be able to just live a healthy, stable life. Ironically, he ended up working himself into the ground. “Twice, my body just shut down. I lost 30 pounds in a month, was insanely sick, and had to take medical leave. So when we started Space Coyote, we knew that it was really important for us to build an environment where people didn't feel like working themselves to death [as] an obligation for the company,” he explains.

The “required reading” for any new Space Coyote employee is the book Let My People Go Surfing: The Education of a Reluctant Businessman, which was written by Yvon Chouinard, the founder of Patagonia. Sundvor credits the outdoor clothing and gear company, which is known for its employee-first mindset—with environmental activism as its north star—for inspiring how he and Cooper created their own healthy environment for employees. Space Coyote has been a remote company from the jump, and let their employees more or less set their own hours. If a Space Coyote employee feels like they want to go for a hike or go surfing in the middle of the day because that's going to help them clear their mind, as long as they let the team know, and are not missing meetings or are falling behind on work, Sundvor says that it’s not just allowed, it's encouraged: “We think that we’ll have a much better company culture, and just much better performance out of everyone, with that type of company mindset.”

Space Coyote’s own sustainability efforts center on packaging and their cultivation process. The brand prioritizes low impact growth methods like dry farming, which uses as little water as possible, and refrains from using compostable plastics for its product packaging; instead, they use joint tubes made from recycled aluminum. “As a company that produces a consumer good, we've realized that there really is no way to make zero impact or to, quote-unquote, make a positive impact environmentally. But it's our responsibility to make as little impact as possible,” says Sundvor. “That's what we're constantly looking at, just how can we do a better job in that regard, and leave the world a better place than we found it.” Another passion of Space Coyote’s is supporting the Last Prisoner Project, a non-profit that works to free those incarcerated for cannabis offenses. They released a collaborative T-shirt that gives 100 percent of proceeds to the cause. 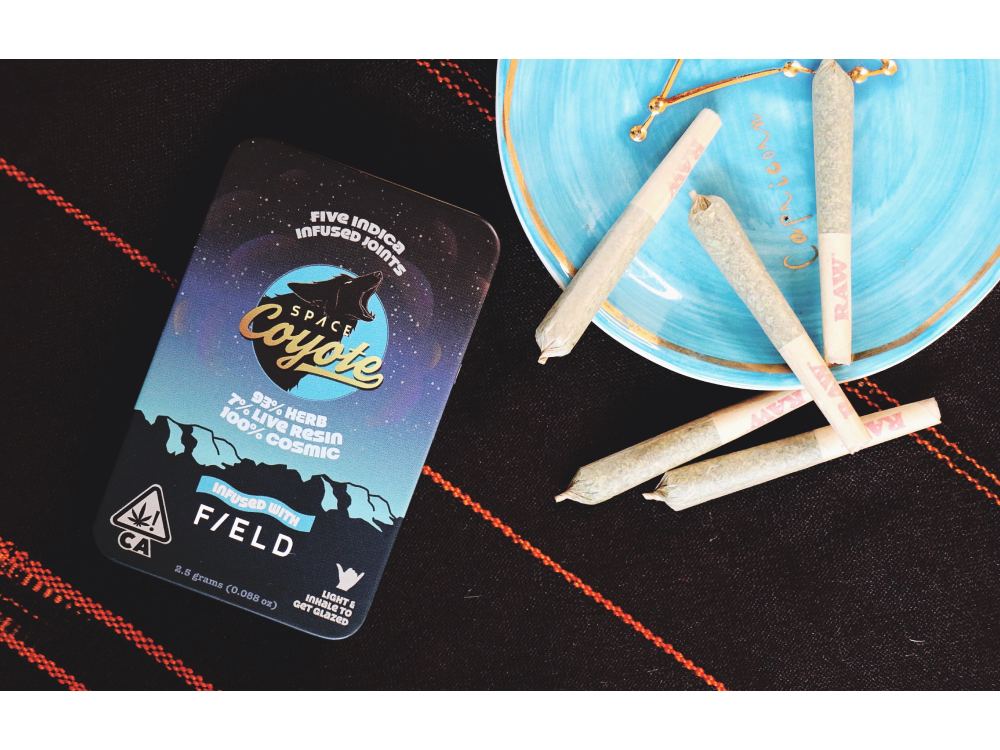 Another interesting component of Space Coyote’s world are Sundvor and Cooper’s actual roles in the company—the two take turns being CEO and President every year, switching roles and responsibilities on an annual basis. “Libby and I have very different strengths. She is incredible on the branding side, the design side, really everything visual that you see from Space Coyote comes from Libby,” says Sundvor. “And then everything that you don't see really comes from me. So the finances, the operations, the product side. So we wanted to do something to show and represent that we were equals in the business.”

Cooper and Sundvor are also former romantic partners, and openly speak about it—something that is unheard of in any professional industry. Cooper shared their story on a public post on Instagram describing the transition of their relationship as "sweet and gentle, sometimes challenging, though mostly just goddamn impressive,” and how they’ve used the “pillars of communication and love” to be able to still run their business and live on the same property. “It’s worked so well,” says Cooper, adding, “It's funny, we made sure that it was gonna work before telling anybody, but honestly, there hasn't been any change to anything.”

Cooper and Sundvor both live in Hawaii on the same compound, where they’ve been building a community and “flexible living environment” where artists can come and stay for whatever amount of time they want. Cooper describes the community as going hand-in-hand with how they’ve approached their breakup and business partnership. “We’re sort of doing things in an alternative way and believe that there are many ways to live life,” she says. “We just believe, especially with everybody experiencing COVID in 2020, that human interaction is so important and such a crucial part of what it means to be a human being, and isolation can lead to so many problems. Our mental health is so important and feeling like you belong is really a part of that, so we just wanted to create a place where people can cohabitate, co-work, and live a really, really beautiful life.”

Marie Lodi is an LA-based writer, editor, and podcaster. Her bylines have appeared in The Cut, PAPER, Buzzfeed News, Bustle, Fashionista, Allure, and more.

These statements have not been evaluated by the Food and Drug Administration. Products are not intended to diagnose, treat, cure, or prevent any disease.
Back to List
‌
Everything You Need to Throw an Epic Super Bowl Party

‌
6 Comedies That Are Even More Hilarious If You’re Stoned

‌
Spark Joy with Sonder, the Whimsical Weed Brand 'By Creatives, For Creatives' (That Means You)

‌
Why Does Weed Make You Laugh?

‌
The Psychedelic, Mind-Altering Power of Travel & How It Changes You