Cheech and Chong. Bill and Ted. Beavis and Butthead. Harold and Kumar. Craig and Smokey. Rogen and Franco. The buddy stoner flick genre is founded upon the duo: two social rejects bonded by their undying love for weed and each other. In contrast to pot-centric epics of psychedelia and introspection such as The Big Lebowski and its less charming shadow Inherent Vice, weed serves to provide a numbing and dumbing for dude duos in the stoner film genre, removed as far as possible from conscientiousness and the normative pressures of masculinity.

The buddy stoner flick is a space of unfettered homosocial affection launched by the imagination of arrested adolescent desires, and predicated upon gender anxiety. The buddy stoner flick is also arguably free of leading women entirely (can a bodacious babe be considered a woman in this genre? No. That’s an object of desire and a comic prop!) and demonstrates a rejection of or resentment towards patriarchal figures and institutions.

The broner film—a portmanteau of “bro” and “stoner” which, conveniently for this article, highlights the underlying homoeroticism of the buddy stoner comedy—is fascinatingly consistent, illuminating, and somehow simultaneously misogynistic and anti-patriarchal. This is by no means a definitive guide or list (like Vulture and Complex's roundups) but an examination of what the broner film genre suggests about its leading men. 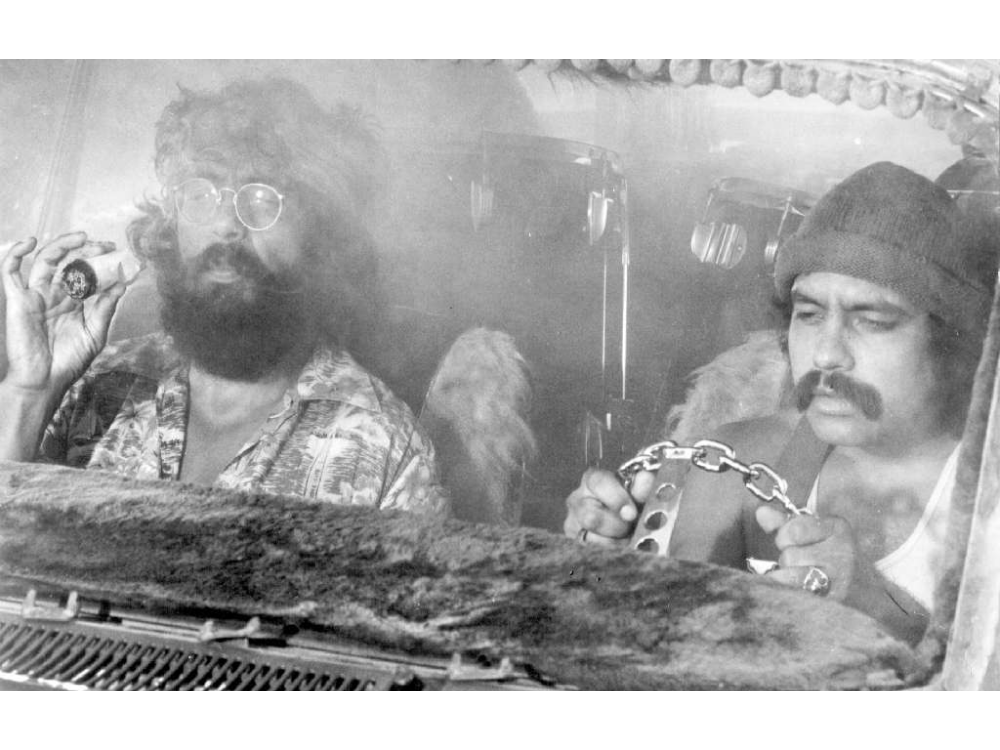 The broner genre began in 1978 with Cheech and Chong’s Up in Smoke: a meandering amoral and anarchic odyssey in which two young men step into a metaphorical (sometimes literal) thick cloud of marijuana smoke in order to avoid responsibility, conformity, and human interaction with the opposite sex. Given the time it was made, Up in Smoke’s masculine anxieties revolve around war and its impact on developing masculinity. Chong’s character—Anthony "Man" Stoner, but referred to as “Man”—ventures off after his parents threaten to send him to military school so he can develop a sense of "discipline" and patriarchal duty. Military school, also invoked in Bill and Ted’s Excellent Adventure, is representative of a surrogate fathering that takes place in a male-only environment.

Cheech plays Pedro, whose cousin Strawberry is a Vietnam vet with hallucinatory PTSD and relies on weed to cope. Meanwhile, the legal system, from judges to cops to immigration agents, are regularly undermined and fail to crush the spirits of our pot-addled anti-heroes. Instead of developing a concept of the self, the stoner buddies enmesh with one another in a perpetual high of content ineptitude and anti-thought—removed from purpose and meaning (similar to Anna Faris's lead character in Gregg Araki's Smiley Face). In the cloud realm of green smoke, brotherhood is forever and women aren’t real. 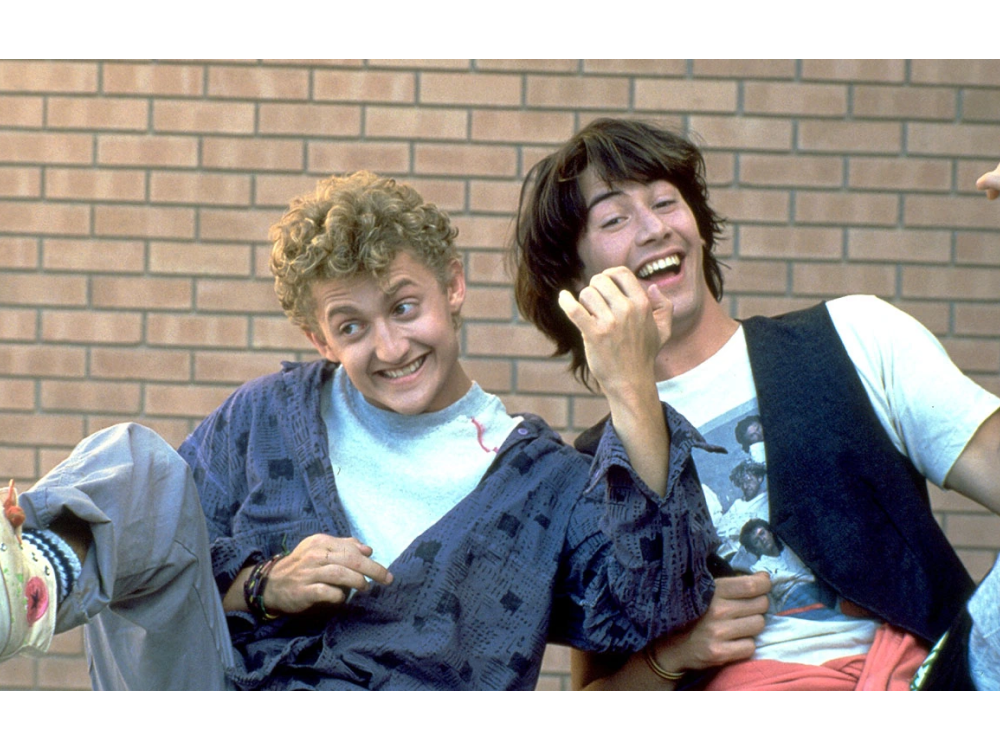 Bill and Ted, by contrast, have a fairly strong sense of purpose and hold a sacred motto: Be excellent to each other. While the Bill and Ted franchise doesn’t actually feature any actual marijuana, the conventions and affect remain the same: threats of military school, slackerdom, failure to please their severe and inadequate fathers, and a giddy airheaded disposition expressed through California surfer slang. Bill and Ted takes the absurdist science fiction route and sends the boys through time to collect mostly male historical figures, including Sigmund Freud—which is very amusing to me given the psychosexual conflicts evident in the film. Ted’s father is a police captain, a quintessentially fascistic hypermasculine patriarch, whose motivation to send Ted to military school is to make him a “real man” and ultimately put an end to his bromance with Bill.

In an interview with The Atlantic, Keanu Reeves (who famously plays Ted with adorable dopeyness) describes his process of understanding Ted's fraught relationship with his dad: “I was thinking about this kind of character and personality that’s born out of pain.” Bill’s father is no more inspiring as a lecherous professor who abandoned the mother of his son for a student represented here as a stereotypical stoner film “bodacious babe.” The more overt pain and rejection in the beginnings of Bill and Ted lead the boys to develop a philosophy of pure-heartedness and positivity. Bill and Ted occasionally use the homophobic f-slur as a punchline, invoking the lingering gender anxieties that plague them even as they traverse spacetime from ancient Greece to the distant future where, in the adolescent fantasy of the broner film, they’ve become benevolent cult leaders whose music unites the world and ends all suffering.

“When I first played [Ted], I was thinking about this kind of character and personality that’s born out of pain.” - Keanu Reeves

On the other end of the spectrum lie Beavis and Butthead, whose slackerdom is aphilosophical, apathetic, and even deliberately antisocial to the point of remorseless violence. Beavis and Butthead are practically surgically attached to one another and less distinct individuals than other stoner duos, and frequently inflict physical harm on one another. Beavis is the more flamboyantly destructive of the two, while Butthead is on the neurotic and introverted side. They’re obsessed with sex and the concept of women within the context of sex, bonding over the objectification of women (though it doesn’t take much to objectify women in this genre as they’re readymade objects) while avoiding taking part in any actual social interactions with women.

Interestingly, Beavis and Butthead eventually included the character of Daria Morgendorffer, a foil of monotone-voiced logic, morals, and disillusionment, whose spinoff show Daria and its depth of interiority would turn her into an icon of third-wave feminism. Beavis and Butthead are depicted as so potently dumb and sadistically anarchic, indiscriminately viewing any kind of transgression as “cool,” that they form a more incisive critique of themselves than their more complex counterparts in the broner genre. Beavis and Butthead’s antisocial avoidance and prioritization of pleasure is an extreme manifestation of the hedonistic, fear-driven impulses of the broner film and its conflicts of adolescent masculinity. Beavis and Butthead are somewhat proto-incels, though far more nihilistic and apathetic. Nonetheless, their world of couch-lazing and nacho-munching cannot exist without stonderdom, and without one another. 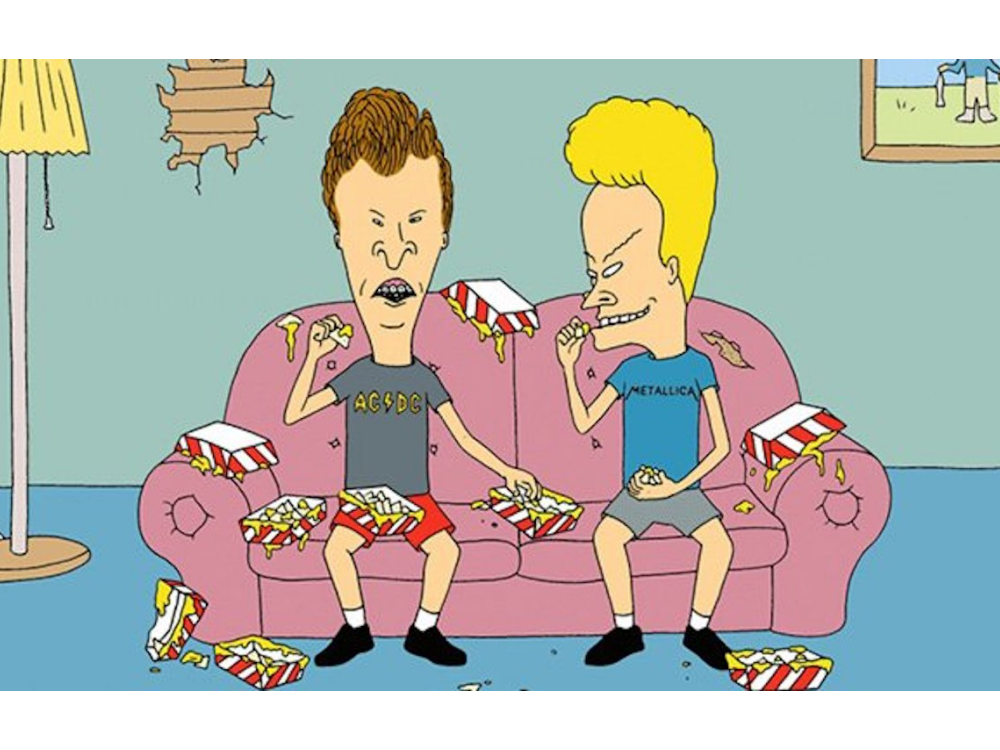 Within the duo, there tends to be one that’s more reserved and resentful, neurotic and conformist, and one that’s more outgoing, vulgar, impulsive, and bombastic. One represents the inflated hypermasculine ego—kind of like a bird puffing its chest to intimidate rivals, while the other represents the covert narcissism of masculinity under threat. The dynamic of this kind of duo as it plays out over heinous, misogynistic, and objectively idiotic antics, is a psychodrama of masculine anxiety.

The key component of marijuana allows for the absurd and fantastical, and the stoned affect opens a private world where two guys can be passionately dedicated to one another without judgement—though a “no homo” joke is expected to be peppered in once in a while. The codependency inherent in the stoner guy duo is the natural integration of archetypes of the male social reject stunted in adolescence: each archetype is so intensely avoidant and fearful of the real world (particularly women) that it requires the other to be whole.

This split ego is perhaps most clear-cut in the Harold and Kumar franchise. Harold is a Korean-American investment banker who endures the chronic emasculation, belittling, and racism of every white man—friend or foe—who crosses his path from the inside of his cubicle or his silver hatchback. Kumar is an Indian-American failson who possesses godlike aptitude for practicing medicine, yet intentionally sabotages his chances of medical school so he can continue to freeload off of his father and do bong rips with Harold. The gay jokes in Harold and Kumar serve to not only distance the pair from actual homoeroticism, but even more so as racist feminization from roving packs of depraved white men—from frat guys to executives to ironically, Neil Patrick Harris, played by Neil Patrick Harris.

As Asian-American men who are depicted as having an exaggeratedly stereotypical ability to function and succeed in the American labor force, the brimming resentment of the franchise comes from elsewhere. Unlike some of the other figures of the genre, Harold and Kumar do not lack the ability to meet the expectations of their fathers or society writ large—they’re both intelligent, educated, and face no obstacles to success. They just prefer smoking weed and hanging out, because despite their good fortune, they’re unable to feel fulfilled within this model of being. Racist interchangeability is a running gag in the franchise: Harold and Kumar are at different times mistaken for surgeons and terrorists, and evade the police due to the sketches of their faces being racist caricatures. Their bubbling rage is rooted in their invisibility, perceived impotence, and desire to separate themselves from their respective peers who they see as “nerds.”

The crisis of Harold and Kumar is their lack of options for manhood that won’t subject them to feminization. The mythical White Castle of the first film is joked about as a metaphor for “the American Dream,” but in all seriousness, the film truly is driven by a hunger—for feeling effective, distinct, and noticed. Harold and Kumar chronicles the escapades of two men who are only truly seen by one another, bonded by their shared love of getting high.

The absence of women is crucial to the adolescent stoner imagination of psychosocial safety—women and girls, even and perhaps especially maternal figures, are a source of anxiety in any form other than an uncomplicated prop or “bodacious babe.” The brand of misogyny in this genre and its leading pairs emerges not from a hatred of women, but an intense fear of women as fully realized people and what coming to terms with that means for the development of the adolescent male self. Frankly, if I wanted to revive Freud à la Bill and Ted, I could have a field day with the connection between the phallic symbolism of the joint and the oral fixation of constant smoking as they relate to gender anxiety.

Harold and Kumar chronicles the escapades of two men who are only truly seen by one another, bonded by their shared love of getting high.

The genre and its comedy are formed in reaction to rejection from the father: literally as well as the greater “father” encompassed by institutions such as education, the government, and the nuclear family structure.

Still, the stoner buddy flick—with its BFF pothead leading duos—refuses to conform to patriarchal expectations. The failure or intentional refusal to conform to manhood leads the main characters not towards femininity, which is absent and/or feared, but a new, fledgling imitation of masculinity which cannot sustain itself without a similarly unstable counterpart.

The models of masculinity in the broner genre are either unattainable, conversely feminizing, or straight-up too dull to subsist in. This narrative pattern of masculine anxiety and codependence naturally found its home in the stoner genre because of the alienation and disillusionment that motivates one to choose weed and alternate ways of living over broken social mores.

These films are both queer and not, remaining entirely reliant on the dedication two men have to sharing one another’s company—in this particular subgenre of pothead cinema, there's nothing like the physical intimacy and emotional bonds that can only be achieved through shared bong rips and a truly good smoke sesh with your bro. That homosociality and homoeroticism found in the broner film genre emerges from a fixation on what the angsty, resentful male figure may lack—instead finding solace in a devoted partnership with one's archetypal opposite, completing one another in arrested development.

These statements have not been evaluated by the Food and Drug Administration. Products are not intended to diagnose, treat, cure, or prevent any disease.
Back to List
‌
Got Long-Distance Munchies? Now You Can Get It Delivered Nationwide

‌
The Truth Behind Green Wednesday

‌
Everything You Need to Throw an Epic Super Bowl Party

‌
Here Are the Most Epic Rap Lyrics About Weed

‌
The Grammys 2020: Cannabis to Pair With Your Most Anticipated Performance